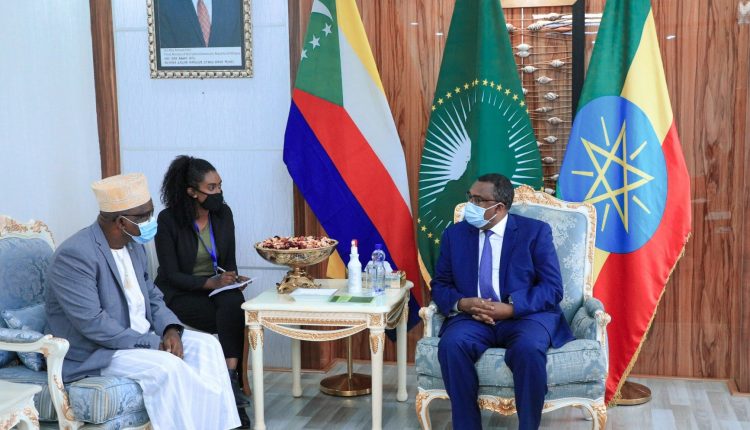 AU-led negotiation on GERD would bear fruits to all involved: Deputy PM

At the onset, Dhoulkamal conveyed the greetings of the people and government of Comoros to the Ethiopian people and President Azali Assoumani, President of the Union of Comoros greetings to Prime Minister Abiy Ahmed.

On the occasion, the Foreign Minister recalled the historical relations between the two countries and said he was delighted to visit Ethiopia, the land of origins.

He further reiterated that Comoros is keen to strengthen relationships in culture, industry, vocational training, and the medical sector, particularly in combating COVID-19.

Dhoulkamal said he had meetings with the leaders of Egypt and Sudan to talk about the GERD negotiations as a member of the AU Bureau and because Comoros take the interests of the three countries as its own.

He expressed his country’s confidence that the tripartite would solve outstanding issues over the dam through a round table discussion.

Demeke appreciated the longstanding relationship between the three countries and said further consultations would be made to engage in sectors that the foreign minister had suggested.

He also appreciated the concern and initiative Comoros has shown to help the tripartite amicably solve the negotiation process.

He said Ethiopia wants to utilize the Nile waters equitably and reasonably in line with the principle of causing no significant harm to the downstream states.

Although Ethiopia contributes 86% of the water resources, it has never been able to utilize the Nile, he said.

Sudan and Egypt want to continue their monopoly over the Nile waters and have continued to internationalize and politicize what purely is a technical matter to keep the unfair status quo, he said.

The Deputy Prime Minister added that Ethiopia is ready to continue the negotiation and confident that the AU-led process under the DRC chairmanship would bear fruits satisfactory to all involved.

He finally appreciated the unwavering commitment of Comoros to stand by Ethiopia in critical times and appreciated the AU Bureau members efforts to give an amicable solution to the tripartite talks.

The two sides have concluded their discussion with mutual understanding, according to the Ministry of Foreign Affairs.