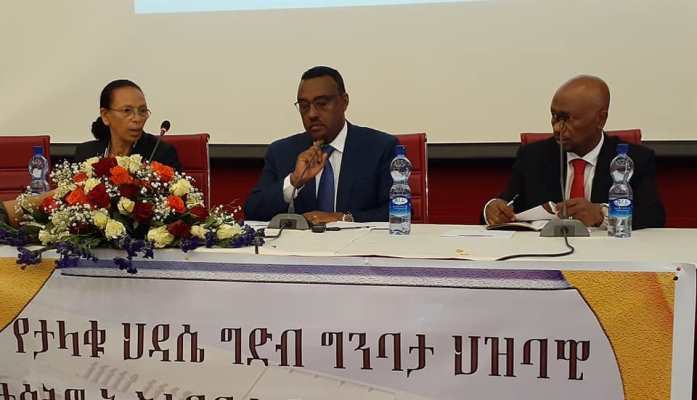 Addis Ababa, March 5, 2020 (FBC) –The National Council on the Construction of the Grand Ethiopian Renaissance Dam (GERD) has expressed its displeasure over the recent statement by the US Department of Treasury regarding the dam.

External interference and a move to put pressure on Ethiopia in the GERD negotiations is unacceptable, said Deputy Prime Minister Demeke Mekonnen.

“Any move to tell us what we should do and shouldn’t do is not appropriate,” said Demeke at the 12th regular session of the Council held today.

The Deputy Prime Minister, who is also Chairperson of the Council, added the next negotiations should be conducted wisely and prioritizing Ethiopia’s national interest.

The meeting was attended by Gedu Andargachew, Minister of Foreign Affairs and Dr Seleshi Bekele, Minister of Water, Irrigation and Energy, among others.

Dr Seleshi on the occasion provided a briefing to the participants on the current status of the project and the trilateral meeting held with downstream countries.

Though the US was invited in the negotiations as an observer, it later acted as a mediator and then drafted an agreement, which is unacceptable by the Ethiopian side, he said.

Ethiopia yesterday launched a 3rd round SMS fundraising program to raise fund for the construction of the dam in the presence of President Sahle-Work Zewde.

In her remark, the President said the dam is more than a development project. Ethiopia wants to use its natural resources to reach its development goals.

She further stated that Ethiopia wants to work in partnership with its neighbours to make the Nile Basin a hub of development instead of a source of conflict.

The dam, which will be the largest hydropower project in Africa once completed, is now more than 71% complete.

Filling of the dam will start in July. GERD is scheduled to be fully completed in 2023.