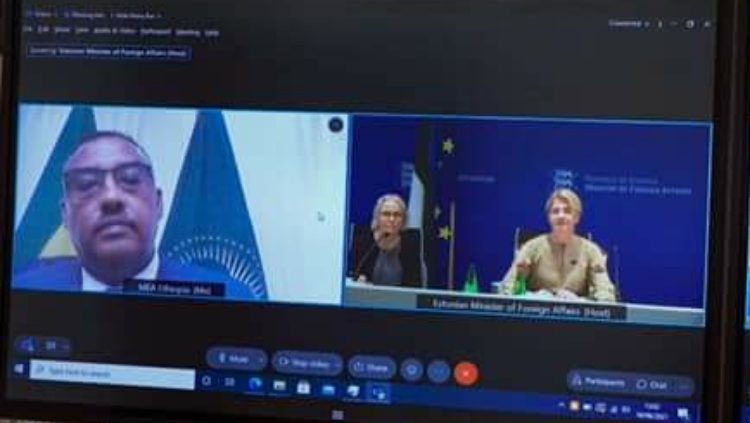 Addis Ababa, June 10, 2021 (FBC) – Deputy Prime Minister and Foreign Minister Demeke Mekonnen has held a virtual discussion today with the Foreign Minister of the Republic of Estonia, Eva-Maria Liimets on ways to advance bilateral ties and cooperate on international forums.

During the discussion, Eva-Maria Liimets said Ethiopia is an important partner of Estonia, and her country wants to further strengthen its comprehensive relations with Ethiopia, particularly in building a digital economy.

Demeke, on his part, said Ethiopia understands that its large youth population is a force for change and is ready to embrace the advanced experiences of Estonia in building a digital society and e-governance system.

In this regard, he recalled the visit paid by the Estonian delegation to Ethiopia to support the country’s efforts to digitize ID cards and expressed hope that relations with Estonia would further boost Ethiopia’s due attention given to technology and innovation as one of the pillars of the 10 years development plan.

Taking into account that Estonia is going to take over the Presidency of the Security Council for the month of June, Deputy Prime Minister Demeke said Ethiopia expects Estonia to play a constructive role on issues related to Ethiopia’s national interest.

In this regard, he briefed the Estonian foreign Minister on major issues related to the situation in Tigray, the Grand Ethiopian Renaissance Dam, and the Ethiopia-Sudan border dispute, and the upcoming general elections in Ethiopia.

Regarding Tigray, he said the government has been busy rebuilding infrastructures, expanding and fully granting access to humanitarians to operate in the region and delivering humanitarian support to those in need covering the lion’s share so far.

Demeke also spoke about the issue of the Eritrean troops in Ethiopia, where he reaffirmed to the Estonian Foreign Minister that the process of their withdrawal has already begun and the government of Ethiopia is committed to expediting it.

Despite all the tangible efforts of the government to return the region into normalcy, some corners in the international community are wasting valuable time by engaging in the disinformation bandwagon which helps neither the population of Tigray nor the efforts of the federal government of Ethiopia, he said.

He further expressed his hope that Estonia would take note of Ethiopia’s concerns in this regard and pass on judgments based on verifiable information.

The briefing of the Deputy Prime Minister also expounded on Ethiopia’s unwavering commitment to the principle of African solutions to African problems in getting peaceful and amicable resolutions to the GERD negotiations under the AU-led process.

Speaking about the Ethiopia-Sudan border dispute, the Deputy Prime Minister urged Estonia and the international community to condemn the belligerent attitude of Sudan and put pressure on it to evacuate its troops from Ethiopian territories which were occupied while the government troops were preoccupied with the Tigray situation.

It is amidst all these preoccupying issues that the government is preparing to hold the upcoming general election, said the Deputy Prime Minister adding that the people of Ethiopia expect the international community to understand the major concerns of the nation and support the government to better take care of them.

Eva-Maria Liimets thanked the Deputy Prime Minister for giving her the precise overview of the issues discussed and appreciated the government’s commitment to hold perpetrators of human rights abuses responsible.

She also appreciated the humanitarian efforts of the government in reaching those in need in the Tigray region and took note of the importance of scaling up support in this regard.

Finally, she expressed her confidence in the AU-led tripartite negotiation for getting amicable solutions to the outstanding issues between the negotiating parties over the GERD.