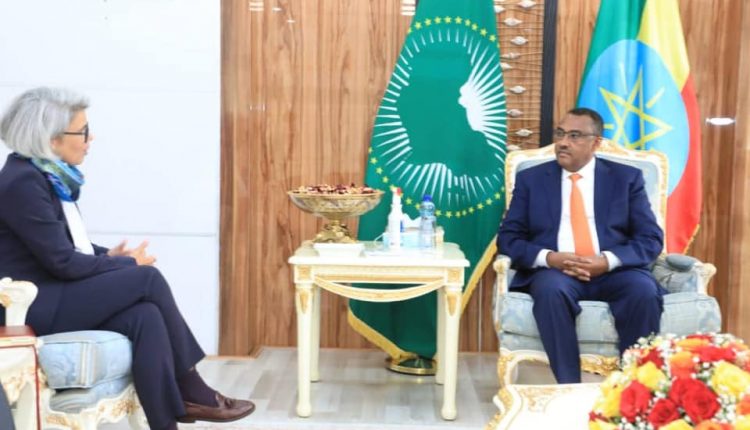 Addis Ababa, July 2021 (FBC) – Demeke Mekonnen, Deputy Prime Minister and Minister of Foreign Affairs of Ethiopia had a meeting on Monday with Annette Weber, European Union special representative for the Horn of Africa.

The two sides have discussed the 6th general elections in Ethiopia, the filling of the GERD and the ongoing tripartite negotiation, the humanitarian ceasefire in Tigray, and the Ethiopia-Sudan border dispute.

Discussing the recently completed successful general election, the Deputy Prime Minister said it was peaceful and credible and the federal government has crafted a road map to closely work with competing political parties.

The Government declared the unilateral humanitarian ceasefire in Tigray to closely work with the international community for better humanitarian access and strengthen the effort to rehabilitate and rebuild the Tigray region, he said.

According to the Deputy Prime Minister, the TPLF has been spoiling the spirits of the ceasefire by engaging in various military attacks exploiting the public as human shields, obstructing humanitarian support, and employing children as soldiers.

In this regard, Demeke said the Federal Government is committed to take the necessary action against whoever hinders the unilateral humanitarian ceasefire.

He also expressed his disappointment over the European Union for spearheading a premature and politically motivated Resolution on the situation of human rights in the Tigray Region, overlooking the Ethiopian Government agreement on the deployment of a joint investigation team comprising the Ethiopian Human Rights Commission and the Office of the Higher Commission for Human Rights.

Regarding the GERD, he said Ethiopia expects the EU to hold a neutral position as an observer of the process, adding that the second filling of the dam is taking place as per the DoP and during the wet season, without causing appreciable harm to the downstream countries.

The discussion between the two sides also included the Ethiopia-Sudan border dispute where the Deputy Prime Minister said Sudan has imposed its claims by force which is a flagrant violation of international law and the principles and purposes of the UN Charter.

It is appropriate for the European Union to condemn Sudan for its aggression and call for a return to the status quo to pave the way for a peaceful settlement of the border dispute, he added.

EU Special Representative Anita Weber, for her part, said the EU wants the joint investigation into human rights abuses to be expedited. She also expressed EU’s concerns over the possibility of a humanitarian crisis in the Tigray region.

Finally, Demeke called on the European Union (EU) to understand that Ethiopia has a role in the stability of the volatile region and that the EU should act in a positive manner instead of putting unnecessary pressure on the Ethiopian government.