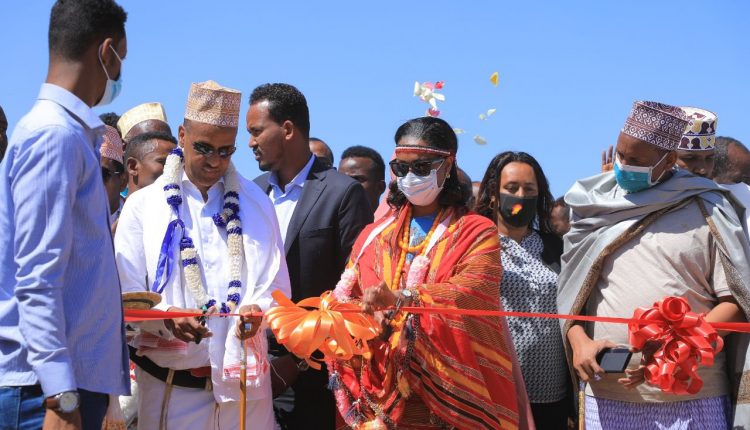 Addis Ababa, January 30, 2021 (FBC) – The first phase of Dewole Heavy Truck project constructed in Somali Region has been inaugrated today in the presence of senior government officials including Deputy President of Somali Region, Mustafa Mouhamed Omer, Transport Minister Dagmawit Moges and Director of the Transport Authority Abdissa Yadeta, among others.

The Dewole Heavy Truck Terminal which has been constructed in Aysha Woreda of Somali Region is said to transform the logistic sector in the corridor and accelerate the economic growth.

Its nearness to the Ethio-Djibouti Railway Dewole station makes the terminal very crucial in facilitating the logistic service, said the Transport Minister on the occasion, adding that 30pct of local transit sevice providers are using it. The terminal will also create job opportunities for the people of the area, it is said.

It is indicated on the occasion that the terminal has COVID 19 testing center, quarantine and sanitation facilities.

Dewoloe Terminal which is under construction at a total cost of 55.5 Million Birr accommodates 500 trucks at a time.

Deputy President of Somali Region, Mustafa Mouhamed Omer, to his part said that the terminal will create ample economic oppourtunity in the reigon and help transform livelihoods of the people in the areas.