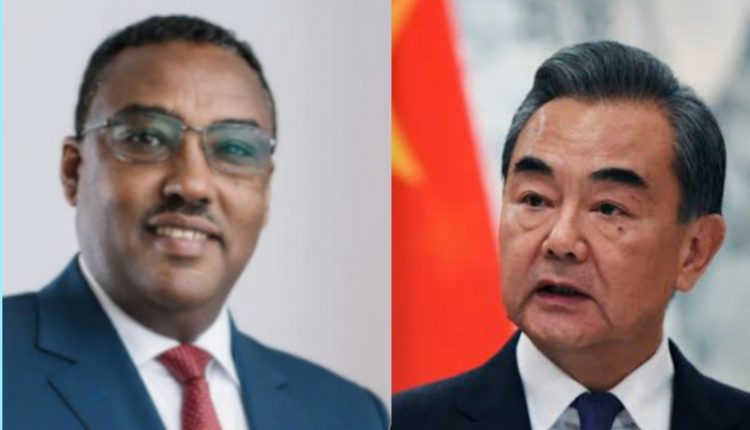 During their conversation, Demeke applauded the long-standing relationship that Ethiopia and China continued to enjoy with a deep sense of equality, respect, trust, and mutual interest.

Appreciating China’s all-rounded support to Ethiopia’s efforts in fighting the COVID 19 pandemic, he explained the importance of producing the vaccine in Ethiopia and requested his support from China in this regard. Responding to this request, Wang Yi said the government of China will keep on encouraging Chinese companies to involve more in the matter.

Speaking about the situation in Tigray, Deputy Prime Minister Demeke said the government has been doing its level best in rehabilitating displaced people, reconstructing destroyed infrastructure, facilitating dialogue with the public, and providing support to farmers.

Despite all the commendable efforts of the government of Ethiopia in addressing the concerns of the international community, such as supporting independent investigations over allegedly committed atrocities, bringing perpetrators of various crimes into justice, and expanding access to humanitarians to the region, the misinformation campaign against the government is not abated yet, he said.

In this regard, the Deputy Prime Minister said Ethiopia is confident that the people and government of China will continue to take note of Ethiopia’s genuine efforts to bring the Tigray region into normal life again.

Following Demeke’s briefing over the Tigray issue, Wang Yi appreciated the efforts of the Ethiopian government to rebuild the region and rebuked attempts to meddle in the internal affairs of the country using human rights issues as a pretext.

In this regard, he said China will continue to stand firm on its principle of non-interference in the domestic affairs of countries through its deep respect for their sovereign right to handle their internal affairs.

The discussion between the two sides also touched upon the trilateral negotiations over the GERD where the Deputy Prime Minister affirmed Ethiopia’s commitment to getting solutions via the AU-led process while Mr. Wang Yi expressed his country’s readiness to support resolves for amicable solutions.

Following Demeke’s briefing on the Ethiopia-Sudan border dispute and the despicable acts of the latter, the Chinese Foreign Minister said as a friend to both of the countries, China would push for a peaceful solution over the matter.

The conversation between the two sides was concluded with Mr. Demeke’s briefing over Ethiopia’s preparation to hold a free and transparent general election where the Chinese foreign Minister expressed his confidence and well wishes for its successful completion.