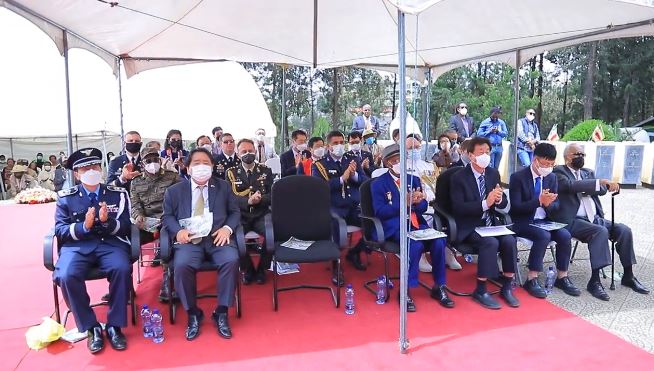 Addis Ababa, May 16, 2022 (FBC) – The Embassy of Repubic of Korea in Addis Ababa celebrated the 71st Anniversary of Dispatch of Ethiopian troops named ‘Kagnew Battalion’ to the Korean War in attendance of veterans who survived the war and their families at Ethiopian Korean War Veterans Memorial Park on May 7.

Addressing the gatherings, Ambassador of Republic of Korea to Ethiopia Kang Seok-hee his country will always remember the sacrifices and contributions of Ethiopian troops who fought for freedom and peace.

“It is my great pleasure to join you to commemorate Ethiopian fighters of Kagnew Battalion for peace and freedom of Republic of Korea.”

Republic of Korea is committed to maintain the historical and longstanding ties with Ethiopia which is marked by such sacrifices, he said.

Ethiopia was the first African nation to respond and come to the aid of South Korea at the outbreak of the Korean War in 1950. Ethiopia dispatched a total of 3,518 soldiers who served in three Kagnew Battalions from 1951 to 1953.

The Kagnew Battalions engaged in combat 236 times and won every encounter, as both attackers and defenders.