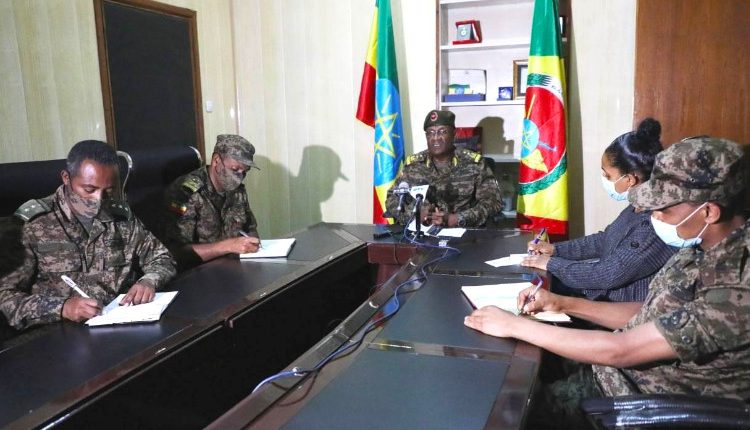 Addis Ababa, February 23, 2021 (FBC) – Director of the Indoctrination Directorate at the Ethiopian National Defence Force (ENDF), Maj.-Gen Mohammed Tesema stated that some Ethiopian peacekeeping forces in Juba, South Sudan who have connection with the TPLF Junta attempted to disrupt the replacement process of the 15th Motorized Peacekeeping battalion with fresh deployment.

The members of the Ethiopian Peacekeeping who refused to come to Ethiopia defying the normal rotation process wrecked turmoil by shouting and rolling their bodies on the ground to grab attention from the international community.

These members of the peacekeeping contingent manipulated the situation they orchestrated to mar image of Ethiopia and made some personnel of UNHCR who have connections with the Junta to distribute related disinformation to the world community, he said.

He further urged UNHCR to apologize for the disinformation it has circulated as if members of the Ethiopian peacekeeping mission were impacted by forceful action of the ENDF.

Saying that the Ethiopian National Defence Force has been registering profound achievements in regional and international peacekeeping missions, Maj.-Gen Mohammed said that some TPLF Junta affiliated army members in Juba, South Sudan tried to mar image of Ethiopia in solidarity with some UNHCR personnel who have allegiance with the Junta.

The action of such peacekeeping members is not in commensurate with the ethics the Ethiopian National Defence Force which is now working to bring remnants of the TPLF Junta thereby ensures law and order in the country.

Maj.-Gen Mohammed urged the media and apologists of the TPLF Junta to refrain from echoing the disinformation emanated from treacherous acts of some TPLF affiliated Ethiopian peacekeeping forces and keep impartial while reporting the issue.

Kirk L. Kroeker, a spokesman for the UN Mission in South Sudan (UNMISS), told Anadolu Agency Tuesday: “169 members of the Ethiopian contingent were due to rotate out of Juba yesterday and to be replaced by a fresh deployment as part of the normal UNMISSES rotation of peacekeepers.

Peace Minister discusses with representatives of UN Agencies, other int’l…

Attorney General to file charges against Maj.-General Gebremedhn and other military…