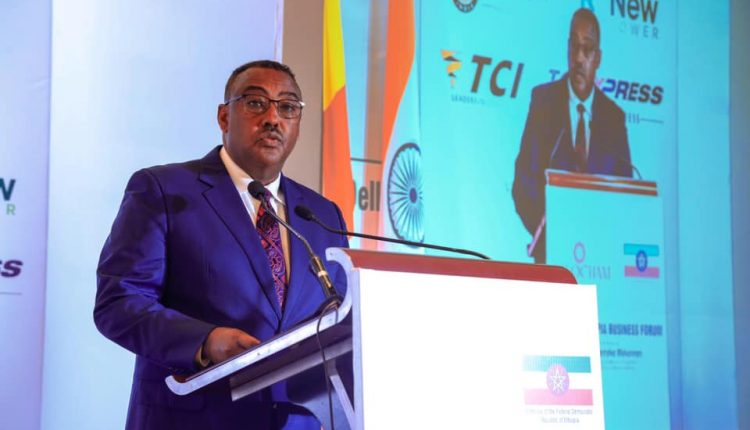 In his remark, Demeke noted the vibrant engagements of Indian companies in the economic life of Ethiopia serving as the main sources of FDI of the country and creating huge employment opportunities.

Noting the current $1.3 billion worth of the trade volume between the two countries, Demeke also appreciated the commitment of the 30 Indian companies who opted to invest in Ethiopia despite the global challenge posed by the COVID19 pandemic.

He said Ethiopia is working to be Africa’s beacon of prosperity by charting out a 10-year economic development plan where new frontiers of growth, such as the digital economy as well as science and technology are included, among others.

The Minister also touched upon the advantage of doing business in Ethiopia stating its strategic positioning in the continent, abundant and trainable workforce, competitive economic incentives, adequate guarantees for investors, and a policy of zero tolerance for corruption.

India’s Minister of State for External Affairs, V. Muraleedharan on his part appreciated the strong relationship that exists between the two countries and underlined the importance of further cementing relations between India and Ethiopia with diversified economic engagements.

Representatives and leaders of some of the Indian companies that are investing in Ethiopia delivered speeches citing the advantages of involving in the economic life of the country.

The forum was organized by the Associated Chambers of Commerce of India (ASSOCHAM) in collaboration with Ethiopian Embassy in India.