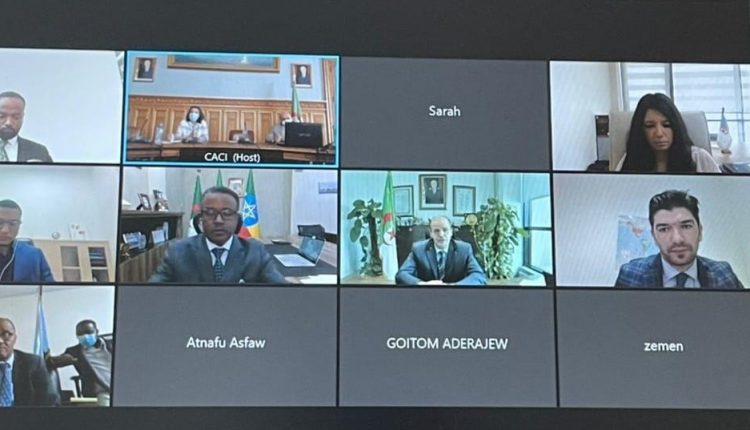 The establishment of the Business Council is expected to enhance comprehensive economic ties between Ethiopia and Algeria.

In his opening remarks, Algerian Minister of Trade, Kemal Razig, underlined the need to translate the existing strong diplomatic relations between the two countries into a stronger cooperation in the areas of trade and investment.

Commending the incredible efforts discharged by the Ethiopian Embassy in Algiers and the Algerian Embassy in Addis Ababa to bring the two countries’ business community closer together, he affirmed the readiness of the Algerian Government to support the work of enhancing trade exchanges between the brotherly countries.

Ambassador Nebiat Getachew, Ambassador of Ethiopia to Algeria, on his part underscored the existence of a strong desire to conduct various trade and investment exchanges between the two countries’ business community. He also thanked the two countries’ chambers of commerce and industry for their strong initiative to sign the MOU agreement and taking the process of enhancing cooperation in the field of business.

Algerian Foreign Ministry Director for African Affairs, Miss Lina Ahmimi, recalled the recent visit of the Minister of Foreign Affairs and National Community Abroad of Algeria, Ramtane Lamamra, to Ethiopia and underscored strengthening trade and investment relations between the two countries was one of the issues given due emphasis during his discussion with higher Ethiopian officials.

She also mentioned readiness of the Ministry of Foreign Affairs of Algeria to support business initiatives from both sides.

Youssef Ademnur, the Secretary General of the Ethiopian Chamber of Commerce and Sectorial Association, who signed the memorandum of understanding, representing the Chamber, on his part explained his strong belief in newly established business council to play a vital role in strengthening the relationship, and he explained the readiness of his Institution to implement the agreement.

After signing the MoU, the Director General of the Chamber of Commerce and Industry of Algeria, Madame Bahloul Wahiba, proposed to exchange the copy of the signed agreement and the list of the contacts of the businessmen from both countries who are interested in each other’s markets, through diplomatic channels.

The two parties also agreed to hold in person sideline meeting in the coming October, at the Dubai International Expo, where both will be participating.

It is to be recalled that an agreement has been reached to establish a business council to strengthen the relationship between the two countries’ business community during the Ethio-Algeria virtual Trade Promotion event hosted by the Embassy in Algiers in January 2021.

Wonchi-Dendi ecotourism project to be transformed into an…