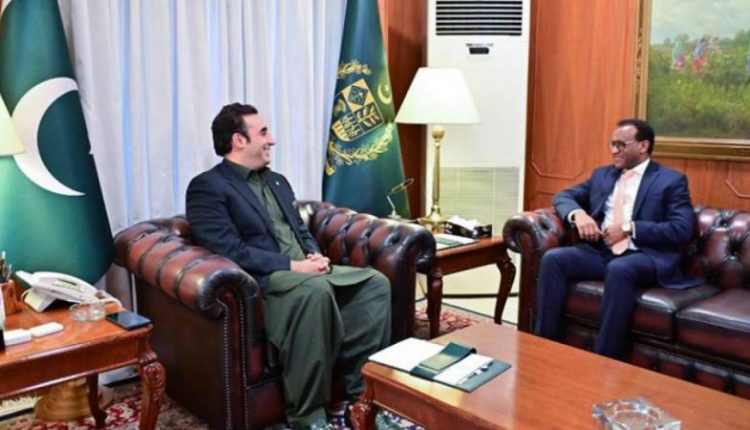 Addis Ababa, November 25, 2022 (FBC) – Ethiopia and Pakistan agreed on enhanced collaboration between the two countries to address the challenges related to climate change.

According to Daily Times’ report, the consensus on joint efforts against climate change was reached during a meeting between Ambassador Extraordinary and Plenipotentiary of Ethiopia to Pakistan, Jemal Beker Abdullah, and Foreign Minister of Pakistan Bilawal Bhutto Zardari.

During the meeting, both dignitaries reviewed the entire gamut of bilateral relations between Pakistan and Ethiopia and also discussed ways to enhance these ties by strengthening bilateral, regional and multilateral cooperation.

Jemal Beker offered condolence over the precious loss of lives of people in the recent flash floods that hit Pakistan due to climate change. “Ethiopia stands by Pakistan and expresses solidarity with the people in such trying times.”

“We have extended support to Pakistan in the backdrop of recent floods and will continue to do so in future,” the ambassador remarked.

He said the government of Ethiopia would work together with the Pakistani government in addressing climate-related issues such as floods, food insecurity and others.

The envoy briefed the Foreign Minister about the green legacy initiative of the Ethiopian Prime Minister Abiy Ahmed and agreed to share his government’s experiences with Pakistan for ensuring a green and prosperous future for the Pakistani people to complement the effort undergoing.

He also briefed Bilawal Bhutto Zardari about the business, trade and investment opportunities in Ethiopia for Pakistani businessmen. “Pakistan can import coffee, tea, pulses, oil seeds and beans from Ethiopia and likewise surgery equipment, construction material, textile, sugar and pharmaceutical products can be exported to the Ethiopia markets.”

The ambassador also highlighted the collective efforts of Pakistan and Ethiopia for global peace and security.

Jemal Beker informed the Foreign Minister about the groundwork completed by both governments for the opening of direct flights between Pakistan and Ethiopia. “The Ethiopia Airlines will soon be flying in Pakistan and start its operations from Karachi in a first phase.”

The envoy invited the FM to be part of Pakistani business delegation which would soon be flying to Ethiopia for exploring business, trade and investment opportunities.

He said Ethiopia wanted ideal relations with Pakistan and stressed on south-south cooperation for progress and development of the developing countries, THE NATION reported.

Foreign Minister Bilawal Bhutto Zardari acknowledged the support of the Ethiopian government to Pakistan on climate change issues and welcomed the opening of the Ethiopian embassy in Pakistan that will advance the mutual bilateral, regional and multilateral cooperation between the two brotherly countries and take the already flourishing relationship to high level.

He also noted the keen interests of his country to strengthen cooperation with Africa in all fronts through ‘Look into Africa Policy Initiative.’

Moreover, he underscored the need to boost the south-south cooperation and collaboration to enhance development and economic growth while tackling the challenges encountered the developing countries.

He said the direct flights between Ethiopia and Pakistan would open new era of enhanced cooperation between Pakistan and Africa.