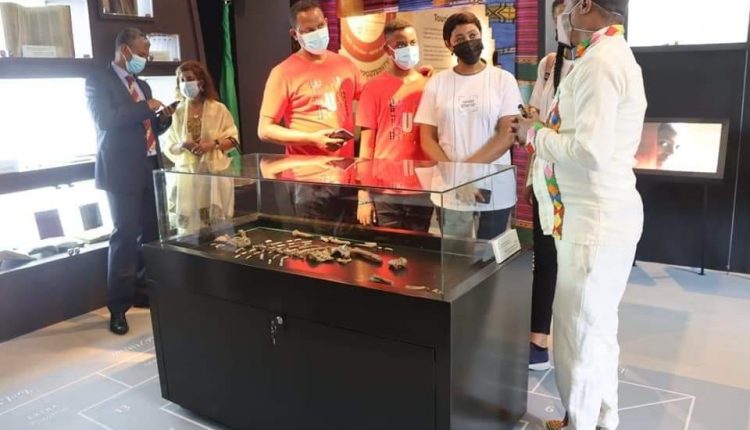 Addis Ababa, October 5, 2021 (FBC) – Ethiopia Pavilion at Expo Dubai was inaugurated yesterday in the presence of high officials and members of the diplomatic community.

On the occasion, Ambassador Misganu Arga underlined that the Expo will have a paramount significance in promoting Ethiopia’s culture, history, business and investment opportunities and tourist attraction sites to the rest of the world.

Showcase of the earliest human kind Lucy is one of the rooms that have attracted attentions of visitors at the Expo.

The Ethiopia Pavilion at Expo 2020 Dubai has successfully installed Relic of Lucy, a replica of the oldest human fossil ever discovered, part of a display that highlights Ethiopia’s ongoing role as a living hub driving and facilitating connections between Africa and the world.

The discovery of the 3.2-million-year-old skeleton of Lucy – locally named “Dinknesh” meaning “you are amazing” in Amharic language – in Afar Region in 1974, rewrote the history of human evolution and earned Ethiopia the reputation of being the “cradle of humanity”.

Throughout its history, Ethiopia has successfully maintained its originality, culture and values – all qualities that will be on display at the country’s Pavilion during the 182 days of Expo.

Visitors to the Ethiopia Pavilion began visiting Lucy in a dimly lit cave, before being taken through the country’s pre-historic history and finishing in a modern factory that underlines its manufacturing successes.