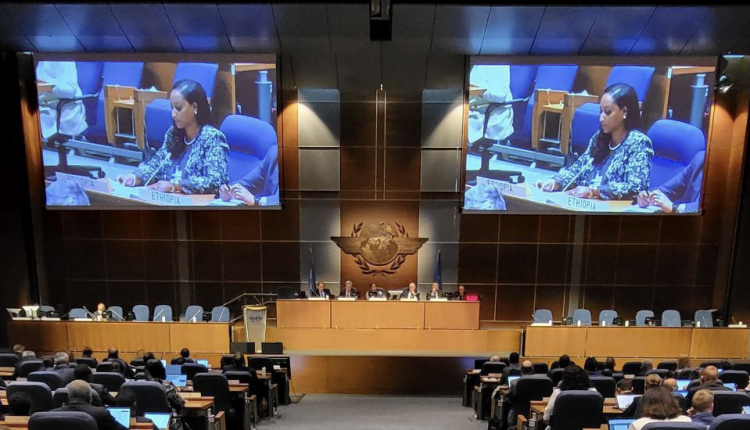 Addis Ababa, October 7, 2022 (FBC) – Ethiopia reaffirmed its commitment to joining hands with member states to realize the implementation of ICAO strategic objectives and initiatives, such as “No Country Left Behind” and “One ICAO”.

Ethiopian delegation led by the Minister of Transport and Logistics, Dagmawit Moges, is taking part in the 41st session of the International Civil Aviation Organization, being held in Montreal, Canada.

MoTL Minister Dagmawit Moges made a statement regarding Ethiopia’s position at the ICAO 41st Assembly.

She stated that Ethiopia, as a founding Member of ICAO and one of the 52 signatory countries of the Chicago Convention in 1944, is an active member state in this platform.

Throughout its membership, Ethiopia has been committed to ICAO founding principles and has been continually engaged in enhancing facilities and services in Air Navigation, carrying out regulatory functions, and provision of standard training in the aviation sector, the Minister asserted.

On the sidelines of the Assembly, Dagmawit held discussions with her counterparts from Nigeria, Qatar, South Korea and Saudi Arabia in the field of transport and logistics.

After their discussions, the officials have reached an agreement to work in cooperation by strengthening the commendable ties between the aforementioned countries created by the transport and logistics sector.

It is known that the Minister had also held discussions with Russia, China, India, Italy, Singapore, Cameroon and Somalia delegations and agreed to cooperate in the aviation sector.