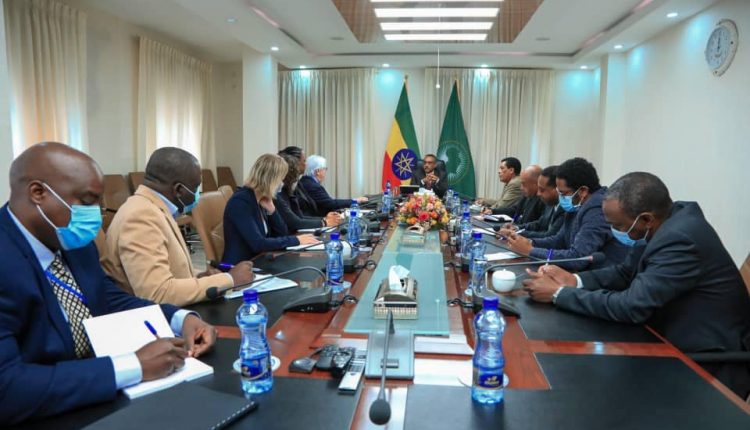 The new OCHA head is in Ethiopia to exchange views on the situation in Tigray, review the humanitarian assistance efforts and visit Amhara and Tigray regional states.

During the meeting between the two sides, Demeke appreciated UNOCHA for productive operations that supported the national humanitarian preparedness and response capacity of Ethiopia since 1984.

However, the Deputy Prime Minister said, the engagement of UNOCHA, both at the Headquarters and Country Office levels, has not been forthcoming since the beginning of the law enforcement operation in Tigray.

In this regard, the inaccurate information that continues to be issued by UNOCHA about the situation in the Tigray regional state through its statements and reports is of serious concern to the Government of Ethiopia, he added.

Speaking about current situations regarding Tigray, Demeke recalled the unilateral humanitarian ceasefire that had been declared to enable farmers to employ the rainy season and provide humanitarian assistance to people in need.

Despite this measure taken by the Federal Government, the TPLF has chosen the road to violence and conflict to the extent of recruiting children to bear arms, he said.

In explaining how the TPLF’s destructive acts obstructed aid, Demeke said 170 trucks that carried food and non-food items got stuck in Semera for weeks due to provocative attacks by TPLF, even though around 40 trucks started moving to Mekelle on Wednesday.

Due to fresh attacks launched by the TPLF, about 220,000 people fled from Afar and Amhara regions, Demeke said, adding that the Government of Ethiopia has been providing humanitarian assistance to these people.

He underscored that OCHA should condemn and hold TPLF responsible for exacerbating conflicts, recruiting and deploying children, and preventing humanitarian aid from reaching the people in need.

The Deputy Prime Minister also expressed his confidence that the new Under-Secretary-General will be transparent, neutral, and exhibit the highest level of professionalism in guiding the operation of the Office.

Martin Griffiths, on his part, appreciated all the support extended to OCHA’s operations in Ethiopia and pledged to communicate well and work closely with the government of Ethiopia.

He also appreciated the initiative taken by the federal government of Ethiopia in declaring the unilateral humanitarian ceasefire and noted that the declaration would have been fruitful had it been reciprocated.

The new Under-Secretary-General also expressed his concern over the depletion of resources in Tigray and underscored the need to have more supply lines to the region.

Finally, Demeke said the government of Ethiopia would do its level best to address the concerns of humanitarians and stay committed to the ceasefire, although new attacks by the TPLF may influence the government’s behavior.

Following the results of the 6th General elections, Demeke said the new government which will be formed in September will launch a roadmap to have an inclusive dialogue with stakeholders and incorporate opposition forces in the governing structure.