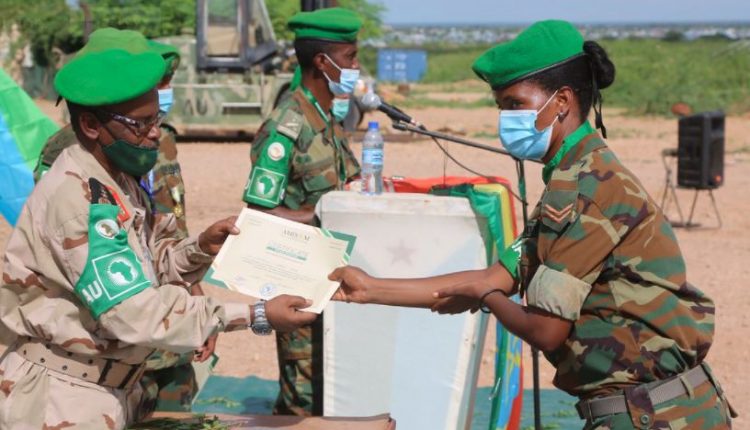 Addis Ababa, May 3, 2021 (FBC) –The African Union Mission in Somalia (AMISOM) has recognised Ethiopian soldiers for their contribution towards the restoration of peace and stability in Somalia.

The Ethiopian National Defence Forces (ENDF) soldiers on Sunday received African Union medals and certificates after completing one year and six months of service in Somalia under AMISOM.

The troops were deployed under the AMISOM Sector 4 in Beletweyne, Hiraan region, where they operated alongside the Djibouti Armed Forces (DJAF) and the Somali National Army to degrade Al-Shabaab terrorists.

Ethiopia is one of the five AMISOM troop-contributing countries, alongside Burundi, Djibouti, Kenya and Uganda.

Col. Abdirahman Riyale Hared, the commander of the Djiboutian contingent under AMISOM, saluted the Ethiopian counterparts for the gallantry and steadfastness while implementing the AMISOM mandate to secure Somalia.

During the medal award ceremony held in Beletweyne, Col. Hared noted that the Ethiopian troops were responsible for securing the central town of Beletweyne and the surrounding areas.

“Today is a special day. We are awarding AU medals of honour to those who have given their time, energy and sacrificed their lives to bring peace and stability to Somalia. We will never forget your gallantry, bravery, sacrifice, and selflessness,” Col. Hared said.

In his remarks, Maj. Assefa noted that the departing Ethiopian troops collaborated with their Djibouti and Somali counterparts in conducting operations against Al-Shabaab in their area of responsibility.

The Ethiopian troops also implemented Quick Impact Projects (QIPs) that aimed to win the hearts and minds of the local communities living in the liberated areas of the Hiraan region of Somalia.