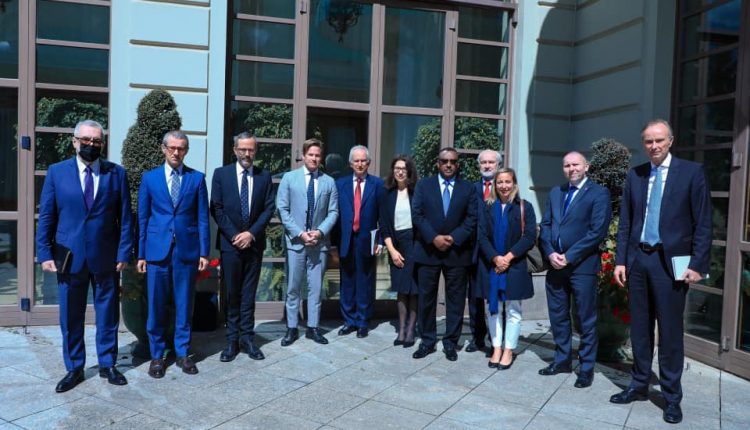 Addis Ababa, October 25, 2021 (FBC) – Deputy Prime Minister and Foreign Minister Demeke Mekonnen met today with ambassadors of France, Germany, Hungary, Italy, the Netherlands, Portugal, Romania, Sweden, and Slovakia in Ethiopia, for a briefing on the northern part of the country.

He appreciated the bilateral support and understanding of the countries at the European Union shown to the people and government of Ethiopia.

Demeke reiterated Ethiopia’s effort to explain to the EU Commission and member states about the current situation in Ethiopia, albeit they showed reluctance to accept the facts on the ground.

The refusal by the EU and the international community to openly acknowledge the Unilateral Humanitarian Ceasefire extended by the government has also unnecessarily emboldened the TPLF clique, he said.

He also expressed Ethiopia’s disappointment over the silence of the EU in the face of massive belligerence, murder, and destruction of civilians in Afar and Amhara regions by the clique.

Demeke also highlighted Ethiopia’s commitment to unfettered access for humanitarian assistance in Tigray with measures, such as reduced checkpoints and continued humanitarian flights to the region.

He said the EU should hold the TPLF to account for obstructing humanitarian operations.

In this regard, he cited the returning of only 242 trucks out of 1,111 that entered Tigray to supply aid and the aborted landing of a UN humanitarian flight in Mekelle by the TPLF.

He called the Recent EU Resolution on Ethiopia unbalanced, adding that threatening to impose sanctions on the whole country based on investigations on human rights violations would be unjustified since the aim should be to take measures against perpetrators of alleged violations.

In charting the way forward, he said Ethiopia would conduct an all-inclusive national dialogue based on a roadmap that has been prepared by the new government.

He finally called on the EU and member states to extend their Humanitarian Airbridge support to the Amhara and Afar Regions besides supporting the sovereignty and integrity of Ethiopia, which is in the best interest of the European Union.