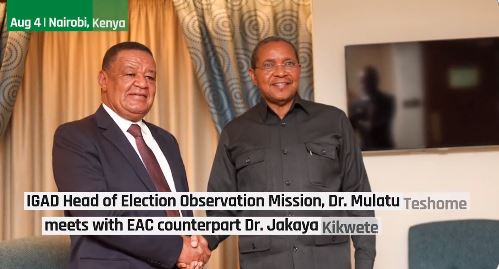 Addis Ababa, August 4, 2022 (FBC) – Former Ethiopian President and IGAD Head of Election Observation Mission to Kenya, Mulatu Teshome (PhD) has met with his counterpart from East African Community (EAC) Jakaya Kikwete (PhD) who was also the President of Tanzania to discuss 2022 Kenya General Elections set for August 9. The two heads of missions agreed to work together during and after the election.

Former Ethiopian president Mulatu Teshome has arrived in the country ahead of the August 9 polls as part of a regional election observation team. Mulatu will head the Intergovernmental Authority on Development (Igad) Election Observers Mission (IGADEOM).

He is expected to hold meetings with senior officials, key national and international stakeholders as well as heads of other election observation missions.

“The objective of the Igad Election Observation Mission is to make an independent, objective and impartial assessment of the 9 August 2022 general elections in the Republic of Kenya in accordance with the national, regional and international standards for democratic elections,” IGAD said in a statement.