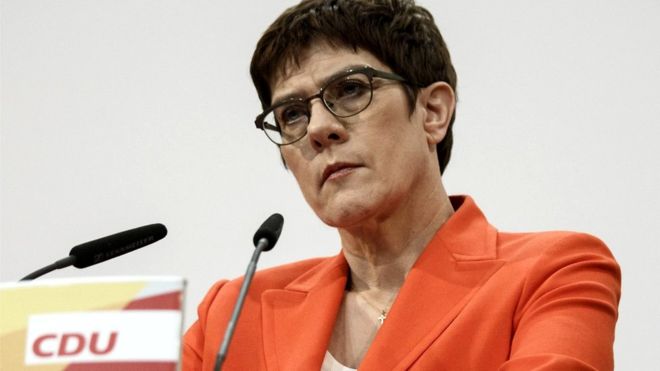 Addis Ababa, February 10, 2020 (FBC) -The leader of Germany’s main governing party, Annegret Kramp-Karrenbauer, is standing down and will not put herself forward to replace Angela Merkel as chancellor, reports say.

Ms Kramp-Karrenbauer took over as head of the Christian Democratic Union (CDU) party in December 2018.
She was seen as the favourite to take over as German chancellor in 2021.

The CDU was recently criticised over a contested regional election result in the eastern state of Thuringia.

Last week, some of the CDU’s local politicians in Thuringia voted with the far-right Alternative for Germany (AfD) party to install a regional premier.

Ms Kramp-Karrenbauer – also known as AKK – made the surprise announcement that she no longer wanted to lead her party following a meeting with CDU party members.

At that meeting, she said that parts of the CDU held “an unresolved relationship” with the far right and left, a party source told AFP news agency.

She is expected to remain in position until a leadership contest determines her replacement in the summer.
Source: BBC

Coronavirus cases double in one day in South Korea

Oromia Police Commission vows to hunt down perpetrators of…

Coronavirus cases double in one day in South Korea