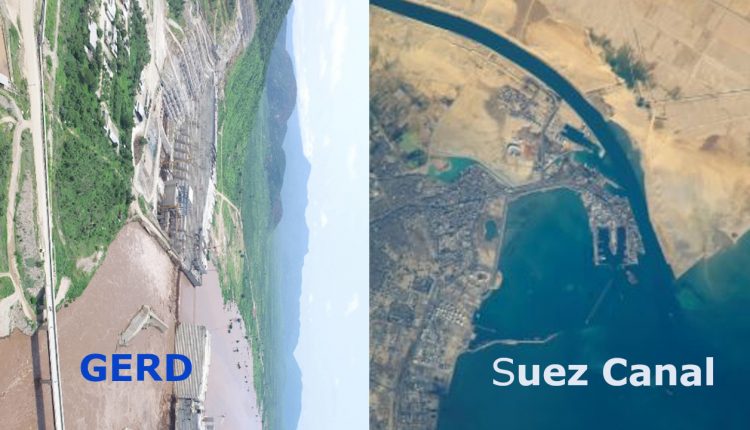 The Suez Canal has provided the financial capability to Egypt that allowed them to build a megaproject like the Aswan Dam.

On the other side of the Nile, GERD 100% owned and financed by the Ethiopian people is near its completion.

Just like the Suez Canal built today’s modern Egypt, the GERD is expected to solve Ethiopia’s most pressing problems of poverty and famine.

The GERD provides the solution not only bringing light to Ethiopia but other nations as well. Seventy million individuals stand to benefit from GERD internationally, particularly East African nations in Sudan, South Sudan, Kenya, Rwanda and Tanzania. GERD is not fueling a country; it is fueling the entire region.

What Ethiopia is doing with the GERD now is similar to what Egypt did in 1956 when Egypt nationalized the Suez Canal from the British and France by making it Egypt’s public property.

This article aims to teach the world and fellow Ethiopians from Egypt’s brave history: the initiatives and sacrifices that the Egyptian government and the great people of Egypt made to protect their country’s national interest.

The Suez Canal is a man-made artificial sea-level waterway that connects the Mediterranean Sea to the Indian Ocean via the Red Sea. The Suez Canal has drastically shortened the distance from 19, 800 Km.  to — 11,600 Km for vessels that travel from Europe to Asia

The construction of the canal presented an opportunity to transform the maritime trade industry. However, the project was immediately met with resistance from Britain that viewed the canal as an intentional threat to Britain’s maritime trade dominance. The British ambassador to France described support for the canal as national suicide. British press termed it “A flagrant robbery got up to despoil the simple people.” Simply put, the British saw the whole scheme as a foolish rip-off. Bellefonds responded by publicly defending the Suez Canal project sparking controversy in Britain with the Prime Minister, Lord Palmerston, and the famous railway engineer, Robert Stephenson, who eventually condemned the Suez Canal project in the British parliament.

So how did the Suez Canal benefit Egypt?

The Suez Canal financed the Aswan dam (and other electric plants) which enabled: 100% access to electricity to the entire Egyptian population, controlled flooding and Provided enough water reserve for irrigation.

The majority of the world’s goods are transported via sea, the Suez Canal greatly reduces the time and cost of transporting goods for nations making world trade much faster than it used to be. Thus, the Suez Canal is one of Egypt’s major sources of foreign currency reserve and it generates more than +5 billion USD a year. The chairman of the Suez Canal Authority (SCA) stated:

The history of GERD is not as complicated as the Suez Canal and it is an ongoing process.

Emperor Haile Selassie, angered by the unfair treaty, retaliated and ended a 1,600-year-long relationship between the Ethiopian Orthodox Church and the Egyptian Coptic Orthodox Church in Alexandria. That same year Selassie launched a 10 million USD American led research entitled “Land and Water resource of the Blue Nile Basin: Ethiopia”. The 7th volume of the research was completed in 1964, which marked the beginning of Ethiopia’s mission to build a dam on the Nile.

Egypt, under the leadership of Gamal Abdel Nasser, retaliated against Selassie by supporting the armed rebellion in the Northern part of Ethiopia creating civil war and political unrest in the country, preventing Ethiopia from building a dam on the Nile. During that era, the people of Ethiopia were unaware of the dam’s utility and potential, but Egypt was.

However, colonial treaties should be redundant in post-colonial eras. Also, Ethiopia, as an uncolonised country, was never part of any treaty regarding its role and rights on the Nile.

Thus, legally Ethiopia is not bound by any agreement and has not violated any agreements. This also means that Ethiopia does not need to consult or to seek approval for constructing a project on the Nile as long as it is in Ethiopian territory. Thus, despite Egypt’s opposition, Ethiopia made it clear to the world that it seeks an equal share of the Nile and is highly against Egypt’s monopoly of the Nile River.

Construction and control of — GERD:

After solving funding issues, the construction of the GERD started officially in 2011, as mentioned earlier. Egypt was highly against it but preoccupied with the Arab Spring and political unrest in the country. In 2013, Ethiopia diverted the Nile water to start the base of the dam and Egypt reacted by threatening the GERD on live T.V., which I will discuss more later.

In 2020, after Ethiopia resisted political unrest, financial trouble and external forces, the GERD is almost finished.

Currently, Egypt is not against the construction of the GERD but rather the timeline for filling of the reservoir.

Initially, Ethiopia wanted to fill the reservoir in three years, and Egypt insisted on extending it to 7 years. After difficult negotiations, Ethiopia decided to fill the dam in 4–7 years depending on the rains. Egypt changed her mind and argued that the filling of the dam within 4–7 years should be extended to 12–20 years, claiming that 4–7 years will minimize its water flow and the amount of water available for agriculture posing a threat to Egypt’s food security. However, Ethiopia already extended its filling and claims that Lake Nassir (Aswan dam reservoir twice bigger than GERD) is enough to sustain Egypt’s water needs until Ethiopia fills the dam.

Egypt wants Ethiopia and Sudan to sign the agreement that was drafted by the United States and the World Bank before the GERD reservoir filling starts. The agreement allocated Egypt 44 billion cubic meters (the colonial treaty allocated Egypt 55.5 billion cubic meters). Ethiopia believes that the agreement developed by the United States and the World Bank is limiting and does not respect the rights and benefits of the Ethiopian people. Moreover, the agreement does not represent an equal share of the Nile and it is just a new version of the 1929 colonial treaty. According to Ethiopia’s GERD dam representative officials, Ethiopia will only start negotiating with Egypt if the agreement is fair and does not favor only one country in this case, Egypt.

Despite Egypt’s opposition of the GERD filling, the first filling of the dam for testing turbines is due to start this July of 2020. The early stage of electricity generation (250–750 M.W.) is also planned to begin in 2021. Concerned about Ethiopia’s decision, in May 2020, Egypt submitted a complaint to the U.N. Security Council accusing Ethiopia of stalling negotiations about the dam. A few days later, Ethiopia sent a response to the U.N. Security Council. The response briefly explains Ethiopia’s equal rights to the Nile water and that Ethiopia is not bound by any treaty or agreement. The response also accused Egypt of stalling negotiations and explained briefly about the filling of the dam that will start this July. The response stated that:

To my Ethiopian and Egyptian brothers and sisters, respectfully stop this nonsense. War is not a solution, and it will never be. However, I sometimes don’t blame people for resorting to this conclusion because, in 2013, the former president of Egypt Mohamed Morsi and high-ranking political officials were discussing how to sabotage the GERD by supporting a rebellion group in Ethiopia to create political instability and even to bomb the GERD on live television. I am not a politician or a military strategist, but I still don’t know how and why that meeting was aired on live TV. I thought those types of discussions were supposed to be top secret. Watch the Live TV discussion Video below.

GERD will benefit Ethiopia with:

World Bank Reports highlight that 44% of Ethiopians have access to electricity. While 55% of the population still rely on firewood as fuel for cooking. What makes it even harder is the fact that Ethiopian mothers and daughters walk tens of kilometres to collect wood (figure 2.5) and fill their lungs with Carbon Dioxide in the process of cooking (figure 2.6).

Education is a human right and it is the most important thing, and everyone agrees, but two-thirds of school children in Ethiopia are forced to stay in darkness and study by candlelight at night (figure 2.7). Furthermore, Ethiopia is one of the fastest-growing countries in the world, but the lack of efficient electricity presents an obstacle to growth.

Egypt downplays the importance of electricity for Ethiopia and makes it sound like the people of Ethiopia require electricity for charging laptops and playing X-Box. Don’t get me wrong, Ethiopia’s dream is to see all of its population have the privilege of accessing electricity that will allow them and use modern technology, but for now, the needs are:

According to WFP and USAID, the main source of famine in Ethiopia is the disruption and lack of rainfall due to climate change. This can be solved by the GERD reservoir that will allow farmers to have access to water all year. In a few years, the GERD will help Ethiopian farmers to eradicate famine in Ethiopia once and for all.

The GERD will generate a surplus amount of electricity that is enough for Ethiopia and for export. Currently, Ethiopia neighboring countries Kenya, Eritrea, Sudan, South Sudan and Djibouti don’t have enough power, and the GERD can fulfil their electrical needs. It is predicted that Ethiopia will be able to generate one billion USD annually from the export of electricity that will increase the national foreign currency reserve that can be used for paying off debts and support more developments in Ethiopia.

Ethiopia’s tourism sector has massive potential but as of now is untouched and faces various difficulties such as political instability, lack of electricity, lack of accessible internet and more. Ethiopia’s political stability is improving, and the GERD is expected to add immense value and solve the significant problems of Ethiopia’s tourism sector by providing electricity that will boost the internet connectivity and creating additional new attraction sites. The GERD is the biggest dam in Africa and the 7th in the world: this title will attract tourists and the various hotels and resorts expected to open around the GERD reservoir (human-made lake). All this combined is expected to boost the tourism sector that will also increase foreign currency reserves and development.

Finally, when I say GERD is the Suez Canal of Ethiopia, it’s not because GERD connects the Mediterranean and the Indian Ocean. GERD is a road that will connect current Ethiopia to prosperity.

A warm welcome to Samantha Power to Ethiopia, and a word of…

‘Stop Interfering’: Ethiopia’s Opportunity After The…