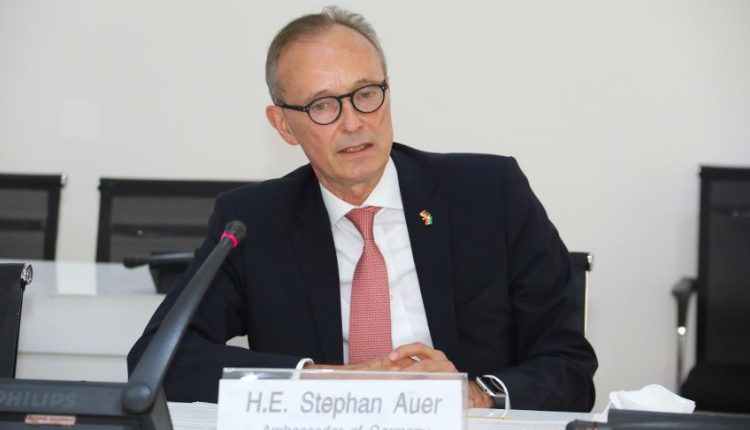 Addis Ababa, December 3, 2020 (FBC) – German Ambassador to Ethiopia, Stephan Auer Auer held discussions with the Foreign Affairs and Peace Standing Committee of the House of Peoples Representatives on the state and prospects of further deepening of bilateral relations between Germany and Ethiopia.

Ambassador Stephan Auer said his country is committed to implement the agreements signed between the two countries in economic, aviation and other areas of cooperation.

Germany and Ethiopia has been undertaking several ministerial level discussions with a view to further enhance their relations in the political and economic levels, the ambassador said.

Ambassador Auer noted that Germany understands Ethiopia’s endeavors to step up its prosperity drive, and reiterated the commitment of his country to cement ties and continue humanitarian support to Ethiopia as part of multifaceted cooperation between the two nations.

Ambassador Auer also highlighted the importance of the protection of civilians, and urged the government to allow international humanitarian organizations access to the Tigray region.

The Ambassador inquired about displacement of people due to law enforcement operation and ban of some media in the country.

Chairperson of the Foreign Affairs and International Relations Standing Committee of the House of Peoples Representatives Dr. Negeri Lencho, to his part, expressed gratitude for Germany for its unreserved support to Ethiopia.

He said that the two countries have been enjoying longstanding relationships in the economic, social and political spheres pledging commitment to further transform the ties between the two nations.

The TPLF Junta perpetrated various atrocities in the country in an intention to hold back the reform journey of Ethiopia and attacked troopes of the National Defence Force and massacred civilians to grab power, Negeri told the delegation.

Government is completing the law enforcement operation and working to reconstruct infrastructure, rehabilitate the displaced, restore peace and normalize the overall situation in the Tigray Region, Dr. Negeri added.

According to the chairperson, the TPLF Junta is disseminating disinformation to the world community contrary to what is really going on in the country and perpetrating proxy terrorism acts in various parts of the country.

Dr. Negeri said that no media is banned in the country adding that humanitarian assistance is being delivered to the displaced in proper manner.

Government’s focus in on bringing the perpetrators to justice and ensuring rule of law in the country, Dr. Negeri added.