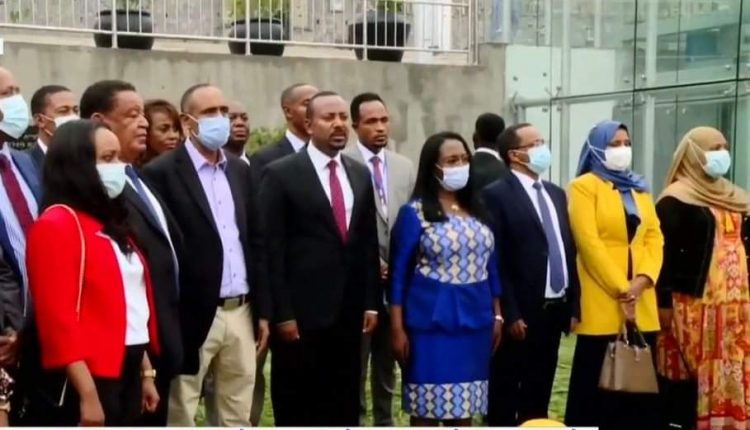 The Meskel Square-Addis Ababa City Hall Project that mainly contains the refurbishment of Meskel Square is the most iconic public gathering space in the modern history of Addis Ababa that has been hosting several cultural, religious, political, entertainment  and sports activities for more than 60 years.

Meskel Square annually hosts the Meskel-Demera Religious Festival which has already been inscribed by UNESCO as world’s intangible heritage. The name Meskel derives from the Amharic term Holy Cross.

Another activity included in the project is the beautification of the 3.5km Churchill Avenue that stretches from Addis Ababa City Hall to Meskel Square. The activities on the avenue include roadside greenery works and side walk developments, among others.

On the occasion, Deputy Mayor of Addis Ababa, Adanech Abiebie said the project would have not been realized without close and proper follow up of Prime Minister Abiy Ahmed who initiated it.

Prime Minister Abiy Ahmed, addressing the gatherings on the inaugural ceremony, said knowledge and goodheartedness is backbone of development calling Ethiopians to join hands and contribute to the efforts underway to realize better Ethiopia.

“Together we will turn the Horn of Africa into the Powerhouse of Africa through concerted efforts” said the Premier calling for regional integration for betterment of the region.

He added “As Ethiopia served as a rising star in the decolonization of Africa, we will also make our nation beacon of continental prosperity”

Individuals and institutions contributed to successful completion of the project have been recognized on the occassion.