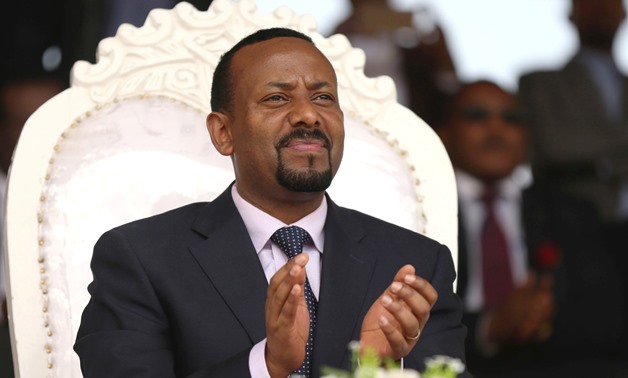 I had muted my phone to avoid disturbance, just the way I used to repress my freedom of expression for fear of arrest a couple of years ago. It insisted, shortly after resumption to bed, another buzz struck my phone once again; this time around some telepathic impulse alerting me to give it a meaning which flashed Ethiopians suddenly with euphoria.

With a little fear of what the nightly buzz was about to notify me, I opened it and ended up reading a smartly coined text a friend of mine messaged me to surprise with the seemingly unexpected victory of Ethiopia over the repressive teachings of Egypt, call it a victory of justice over unjust, the victory of humbleness and diplomacy over bigotry.

“The man is very smart,” writes a friend of mine with his measured words. He picked to salute Abiy Ahmed (PhD). His next text read, “He practices what he preaches. He is a man of deeds, not only words. I am now completely convinced that he is committed to making difference”

What surprised me most was the U-turn my friend made against his ill perception he held about Dr. Abiy and his circle of reformists, their genuine call for change, aspiration of prosperity.

He for no reason, as many expelled looters and experts of tortures do, he was heard belittling many of even the smartest decisions PM Abiy has made ever since the very day he took office to desperately shake off backlogs of centuries of old problems which some of his predecessors intentionally introduced to the country.

Abiy is well understood here in Ethiopia as he is well respected and promoted by the international community. His bravery and outstanding achievements are yet untold. He is outsmarting all the back dragging hostile and political conspiracy he is facing.

Imagining the revolution he may embark if he is able get rid of the obstacles along the journey to democracy, prosperity and renaissance? He once said, “It’s a matter of time, all the political merchants would vanish along, and now are being ticked off one after the other”.

Some misunderstand his ambition of leading the nation whereas some others stood against him for being expelled from looting and torturing. And some of them for their hidden motive to quest their power monger and few others for reasons they belittle his achievement and blacken his grand deeds.

Some months ago members of the old guard accused him of selling the flagship project as if no time would come to reveal the truth. Imagine how shamefully and destractively they are to tempt and claim power at the expense of sovereignty.

I am expecting the kind of blackmails they are now masterminding to confuse us with fake news against the good news we have heard of the Grand Ethiopian Renaissance Dam, GERD. I feel neither history nor law and even God will excuse those greedy Ethiopians who black mail, belittle and defame all grand deeds of national, continental and international significance.

I very well know that they are addict of looting not only material property but also fond of stealing identity too. Let them go until truth itself will have its verdict soon before they all go mad because of all the good news Ethiopia is enjoying by Abiy Ahmed Ali and his circle of reforms.

Trust me, the unexpected news that we are celebrating is just the slight of grand gifts Abiy has offered us, he for sure, has the personal commitment and political will. The manifesto will be supported by all Ethiopians and the international community.

We are now on the countdown to accomplish our mission and celebrate victory over colonial thinking Egypt has long prefaced to prosper at the expense of our disgrace.

I am still in mood of the victory, getting high of Abiy-led supremacy over an outdated mentality against blackness entirely.

Hat off to Abiy Ahmed (PhD) can accomplish a lot for Africa. He is a man full of wisdom to sense the right time to do significant things.

The old mentality of belittling someone has now deep buried never to return. The old teaching of monopoly over Nile waters has been forced to gently fade away.

That very night and afterwards, and in the years to come nothing can abort me from enjoying the psychological victory Ethiopia has begun to cherish, visualizing the mushrooming urban life Ethiopians to come will craft along all along the man made reservoir.

Can’t you imagine this twin of Lake Tana, GERD is about to offer Ethiopia, the nearly heaven like aquatic life the dam will in the visible years in sight, the ever green gorges and its lily and native plants carpeted landscape of Bamza and Guba of today.

Best of all, the diplomatic victory Ethiopia has scored crushing all the lengthy, unjust and perhaps inhuman appeals of Egyptian politicians have not only assured that the dam is on its countdown to shine bright cities of Ethiopia, but also has already begun.

Come on! Don’t try to belittle this Adwa victory equivalent success, a battle Ethiopia has outsmarted old era mentality, a water made-monument fit and complete enough to vividly witness and boast of Ethiopians, to tell what is meant Ethiopia and Ethiopianness, Africanness.

Salute to Dr. Abiy Ahmed Ali, hat off to late Meles Zenawi Asres, long live to architects of this flagship project both alive and fallen, thumbs up to Ethiopians young and old poor and rich who have made the seemingly impossible.

Old teachings coupled with colony era treaties, which labeled Ethiopia as a bystander of own natural resource, has misled Egypt, even fooled it preaching as Nile originates from Egypt itself, sadly ignoring Ethiopia, a country which contributes 86 percent of Nile waters, whose 50 percent of its population are unfortunately still leading nearly stone age life style, collecting fire woods for cooking, tempting….

The power plant is meant a lot to Ethiopia, as Aswan is to Egypt. Should I waste your time ticking off the vibrant lives they have been enjoying since Aswan Dam kicked off?

We badly tempt, kind of modern life not, rather at least basic needs namely sufficient and never fluctuating power energy of multiple significances.

When I think of the degree of meanness some Egyptian politicians have shamefully tabled for debate, rejecting our natural right -I doubt their civilization.

What a diplomatic victory, what a never faded patience, what a well measured, scientific and researched approach and bravery Ethiopia has been showcasing to the international community led then by late Meles Zenawi , now by the reformist PM Dr. Abiy Ahmed, a man who is living his words up, a man of knowledge with a wisdom to intercept the right time to do the right thing of national, continental and international significance.

Salute to Dr. Abiy Ahmed Ali, a man who has come to tick off backlogs his precedes has left undone, better to say an unlucky man to reshape a disorganized country, a man who is committed to cleanse a nation which some of his predecessors intentionally ruined it.

Oops! Does my piece sound its aiming at promoting a cult!?!I have nothing to earn in rerun for what I’m saying and failure to salute Dr. Abiy’s role has nothing to snatch from me.

But it hurts me if I hesitate simply for fear of being labeled as a die-hard cadre of Prosperity Party. I’m not a cadre, a paid promoter of personalities of any individual and party, rather I’m here promoted by patriotic deeds Ethiopia today is accomplishing breaking all the desperate incidents of multiple motives.

Abiy said he is confident, many more success stories, as big as the dam itself are yet to come so long as Ethiopians maintain their togetherness, giving no room to architects of fake news to destabilize Ethiopia.

Ethiopia is on the countdown back to the future, to the lost identity of ours which once faded away, and now is fast approaching to mush room at its original site, at the lip of the Nile. A cockcrow is there heralding the dawn of Ethiopia, reminding us to break the long, long and long fasting we have made it. Justice has at least begun to be served….

NO MORE LUST TO OUR LOST IDENTITY OF THE GION CIVLIZATION…Gush! I’m still getting high, not by drug, but by chapter two of Adwa…back then against the fascist Italian colonialist sat a battle field, now against old mentality, just with smart thinking and super fabulous diplomatic approach.

Salute to Dr. Abiy Ahmed Ali and his circle

Addis Ababa to be restructured in to 11 sub cities