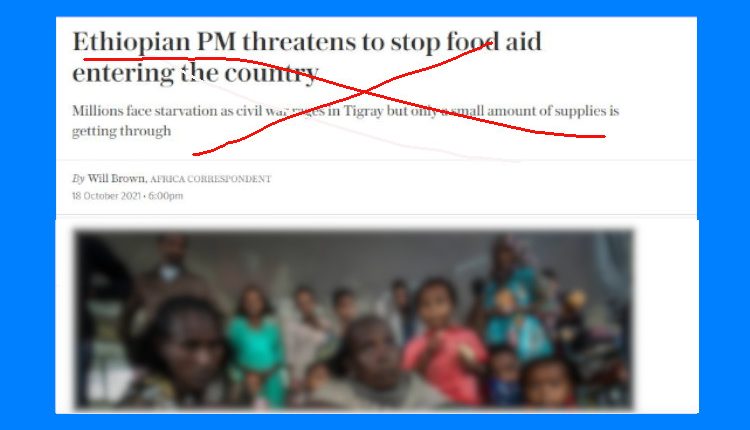 Addis Ababa, October 10, 2021 (FBC) – The Telegraph continued its streak of misinforming its readers regarding events in Ethiopia.

In its latest article titled “Ethiopian PM threatens to stop food aid entering the country,” author Will Brown blatantly misquoted Prime Minister Abiy Ahmed of Ethiopia to bolster a preordained narrative in which Ethiopia must be vilified.

At the same time, insurgents of the TPLF are spared criticism, if not outright praised.

According to the Telegraph, the Prime Minister stated, “if we make sure that this thing called wheat [food aid] does not enter Ethiopia, 70 percent of Ethiopia’s problems will be solved”.

This translated quotation from Amharic is, of course, a gross manipulation of the Prime Minister’s words, which were initially delivered in Amharic. In actuality, the Prime Minister stated his desire to see “Ethiopia become food self-sufficient and less dependent on food aid coming from abroad,” a noble goal widely shared among the Ethiopian public.

Perhaps the Telegraph would like to reassess its assumptions of what the Prime Minister said or did not say. If translating Amharic into English is particularly challenging, they should seek help before becoming a disservice to their readers, who deserve to know that facts.

What the Telegraph has done in this article goes beyond taking things out of context or misinterpreting the Prime Minister’s words.

According to Ministry of Foreign Affairs, this is an unscrupulous disregard for what was said and a complete twisting of the facts for agenda-based reporting. For the sake of journalism and factual reporting, the Telegraph should reevaluate this report for its merit and ask if it meets journalistic standards.