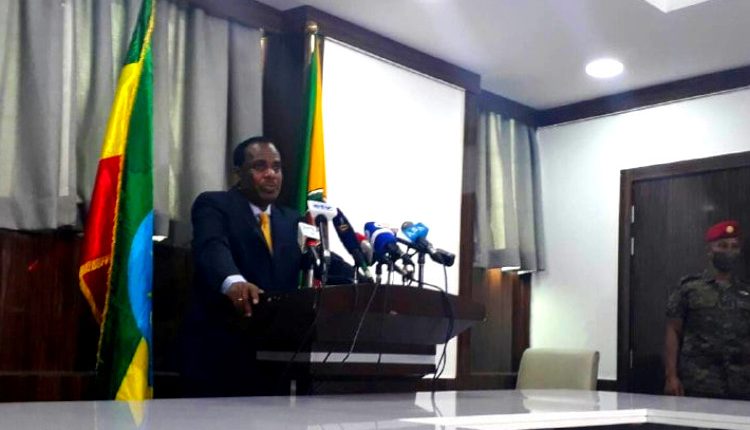 Addis Ababa, November 11, 2020 (FBC) – Ministry of Defense has stated today that the military offensive declared by the government is aimed to seize the TPLF rebel group that puts the nation’s sovereignty at risk.

The military action is not just a chase to arrest an ordinary but an operation to capture the rebel group that puts the sovereignty of the nation in to a risk of potential danger.

The Minister of the Ministry of Defense, Dr. Kenea Yadeta has briefed the media on the misinformation campaign being carried out by the rebel group.

“The disinformation the rebel group is disseminating clearly show how it is faced with hopelessness,” said the Minister.

Minister dismissed the information the rebel group distributed as if the National Defense Force is attacking the people of Tigray in collaboration with external forces as a baseless claim.

The Defense Force is only targeting members of the rebel group as it is taking a great care to protect peaceful people in the conflicting areas during the military offensive.

TPLF has also been spreading distracting information as though the Defense Military is attacking infrastructural development facilities in Tigray Region, according to the Minister.

Dr. Kenea said the rebel group is trying to portray the law enforcement measure being taken by the government as a civil war.

The National Defense Force does not need a support of any external force, and is well ready to effectively suppress the rebel group, he stressed.

According to the Minister, the Defense Force is carrying out its law enforcement mission in a more careful so that peaceful civilians will not be impacted by the conflict.

Defense forces are registering a successful track record in taking military actions against the TPLF rebel group, he said.

Defense Minister urged people of Trigray region to comprehend the conspiracy theory of the group and avoid unnecessary harm that may stem from deceitful acts of TPLF.