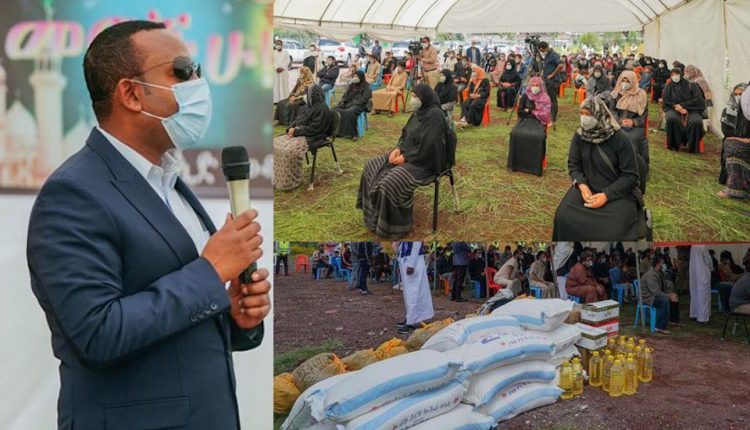 Addis Ababa, May 22, 2020 (FBC) –Prime Minister Dr Abiy Ahmed today visited Syrian refugees in connection with the Eid al-Fitr, which marks the end of the holy month of Ramadan.

The gifts include food items, cloths and sanitary supplies.

In a tweet, the Prime Minister said “I visited Syrian refugees ahead of the end of the fasting period.”

“These refugees have made a home in Ethiopia fleeing violent conflict and deserve to celebrate the end of Ramadan in dignity.”

Recalling how Syria was a big economy before the conflict, he said, the government will do all it can to make them feel that they are at their second home.

Ethiopia was working to provide protection for those whose lives have been destroyed, the Prime Minister added.

The Syrian refugees extended their gratitude to the Prime Minister and his government for all the support they were given during the holy month of fasting.

“Today’s gifts show the attention and care given to us in Ethiopia,” they said.

The Prime Minister also visited the work that two brothers have been doing out of their rental home in the Bole area to support around 100 vulnerable individuals during the COVID19 crisis.

Council of Ministers proposes over 476bn birr budget for next year

Council of Ministers proposes over 476bn birr budget for…