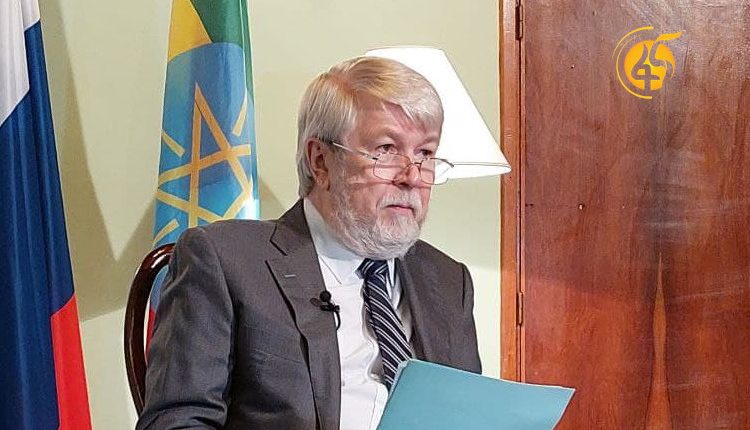 Russia will continue to be reliable and loyal partner of Ethiopia: Amb Evgeny Terekhin

Addis Ababa, June 11, 2021 (FBC) – In an exclusive interview with FBC in connection with the Russia Day 2021, Ambassador of Russia to Ethiopia, Evgeny Terekhin reiterated the commitment of his country to enhance partnership with Ethiopia in multifaceted areas.

The ambassador said that the first informal contacts between Russia and Ethiopia dates back to the 15-16th centuries although diplomatic relations between our countries were established in 1898.

Russia is a reliable and loyal friend and partner of Ethiopia is undeniable. The relationship between the two countries is based on traditions of friendship, partnership, mutual respect and mutual support.

“At present, we observe a significant intensification of political dialogue between our countries: regular contacts are maintained at the high and highest levels, there is a systematic exchange of views at the expert level on various global, regional and bilateral issues” said the Ambassador.

The international inter-party conference held under the title “Russia-Africa: Reviving Traditions” that was attended by Ethiopian Prime Minister Abiy Ahmed, who is also the President of the Ethiopia’s ruling Prosperity Party is among indication for the ongoing fruitful dialogue at continental level, the Ambassador noted.

He recalled the cooperation agreement signed between the ruling parties of the two countries – the Ethiopian Prosperity Party and the Russian party “United Russia”. Russia is making every effort to bring trade, economic and investment cooperation with Ethiopia to intensive level, ambassador reiterated.

An important bilateral project today is the cooperation between Ethiopia and Russia in the peaceful use of nuclear energy, he said, adding the Russian and Ethiopian sides are consistently working to introduce in Ethiopia advanced technologies, which have many benefits for the socio-economic development of the country.

“In particular, the construction of the Center for Nuclear Science and Technology in Ethiopia, envisaged by the agreement signed on the margins of the Sochi Russia-Africa Summit in October 2019, will provide new opportunities for economic and social well-being through the use of nuclear technologies in medicine, agriculture, industry, etc.” Ambassador Evgeny Terekhin elaborated.

“There are good prospects for cooperation in other areas of high technology. Last year, the agreement between the Ethiopian Institute of Space Science and Technology and the Keldysh Institute of Applied Mathematics was concluded. We are working on plans to create a Biological Research Center in Ethiopia on the basis of the Joint Russian-Ethiopian Biological Expedition, which has been operating for over 30 years”, he added.

Ethiopians are showing interested in purchasing cars and aircraft, machinery and equipment, spare parts, construction materials, electrical and chemical products, fertilizers, household goods and tools in Russia. In their turn, Russian entrepreneurs are counting on an increase in supplies to Russia of coffee, leather and leather products, spices, fruits and vegetables, some oilseeds and grains, flowers, the ambassador remarked.

Russia is ready to consider supplying the Sputnik V coronavirus vaccine to Ethiopia after it has undergone regulatory certification, he said.

Regarding cooperation in human resource development sector, the Ambassador disclosed that 38 such scholarships have been allocated for Ethiopian students this year in various fields of study. “We continue to work on increasing that number in the coming years. The main impetus to pursue efforts in this direction is the visible interest of Ethiopian youth, pupils and students to receive a Russian education, which is known for its high quality.”

The agreement signed between the two countries on cooperation in peaceful use of nuclear energy created a legal framework and outlined prospective areas where our cooperation should move forward.

Russia has repeatedly expressed its position on the GERD issue, and it remains unchanged: there is a need to seek a mutually acceptable solution through dialogue among Ethiopia, Egypt and the Sudan, taking into account the interests of each party and strictly complying with the norms of international law.

We support the continuation of negotiations; we believe they are the only possible and legitimate path to mutually acceptable solutions. We believe that no one other than the Nile basin countries themselves can find the right solution.  In fact, it is the case in which “African solutions to African problems” principle is to be practically implemented. On the contrary, a surplus of advice from the outside can bring on imbalance into the negotiation process.

The same applies to the Ethiopia-Sudan border dispute. We believe that the two neighboring countries are capable of finding a mutually acceptable solution to this century old issue through peaceful dialogue. In our view, that is of paramount importance to stability in the Horn of Africa.

Regarding the situation in the Tigray region, the Ambassador said that Russia has repeatedly stated its position that this is an exclusively internal affair of Ethiopia. Russia commend the efforts of the Ethiopian Government to restore normal life in the region, he said.

“We are closely following the situation and are pleased to note that public institutions, schools, banks and industries are gradually reopening. People in need of humanitarian assistance are receiving it. In that regard, we see a good faith and a responsible attitude on the part of the Ethiopian authorities. We hope that this will contribute to the speedy return of life to full normalcy in this region” he noted.

“The claim circulating in the media that Russia is returning to Africa is not a fiction, and the Russia-Africa summit held a year and a half ago testifies to this” the ambassador said, adding “Our positions in terms of trade and economic cooperation are still difficult to compare with those of China or some Western countries, but they are growing rapidly. Russia has friendly partnership relations with the vast majority of countries on the continent, and this is a good foundation for expanding practical cooperation in the future.”

The first Russia-Africa Summit in Sochi from October 23-24, 2019 gave a strong impetus to the institutionalization of Russian-African dialogue.