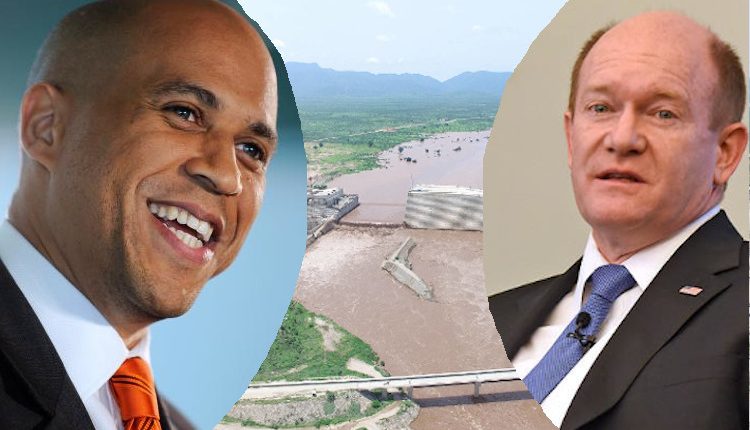 Addis Ababa, June, 29, 2020 (FBC) – United States Senators, Cory A. Booker and Christopher A. Coons, in their letter to Secretary of the Treasury Department, Steven Mnuchin, have urged US to reestablish itself as a neutral arbiter in GERD negotiations among Ethiopia, Sudan and Egypt.

“What began as an ambitious project to realize development potential through the creation of electric power supply and agricultural irrigation, has deteriorated in to a diplomatic standoff in a region wrought with geopolitical tensions.”, said the senators.

The United States should strive to be an agent of stability and peace in East Africa, to encourage all parties to resolve disputes through diplomacy, they demanded.

“As you know, after disapproving of a draft agreement written by the United States that was perceived to be favoring Egypt’s position, Ethiopia withdrew from the negotiations in February of this year, leaving the region in limbo and susceptible to dangerous miscalculation.”, says their letter.

Senators Cory A. Booker and Christopher A. Coons quoted Prime Minister Abiy Ahmed as saying “Ethiopia would begin filing the GERD’ reservoir in July without an agreement in place.”

With the dam near completion and both sides ratcheting up hostile rhetoric, the United States must help de-escalate the situation, the senators stressed.

“The perception of U.S. partiality, however, makes such an effort more difficult by hardening the parties’ positions and limiting the Administration’ stability to serve as an honest broker for a resolution of the dispute,” the letter of the senators reads.

“Due to this and objections from Ethiopia, Sudan, and the African member states of the United Nations Security Council, the Council does not appear to be the appropriate venue to debate the issue of the GERD.” the letter continues.

Any threats to suspend bilateral or multilateral aid to Ethiopia or any effort to link such assistance to Ethiopia’s position on the GERD would be counter to the U.S.’s priorities in the region, the senators explained.

“Given the importance of the U.S.­ Ethiopia bilateral relationship, our interests in the success of the transitions in both Ethiopia and Sudan, and our long-standing investments to promote peace and security in the broader region, our diplomatic engagement and foreign assistance there must advance our interests and promote stability in the region.”, they said.

The senators urged the US to leverage the expertise of career officials at the State Depa1tment, who have deep knowledge of the regional and national security issues at play and who have reportedly been sidelined in the negotiations thus far, to support the parties in finding a mutually beneficial compromise.

Egypt, with its security partnership with the United State; Ethiopia with its recent historic political transition that could offer a democratic partner in the horn of Africa; and Sudan in its own historic civilian transition are important regional players, the senators underlined.