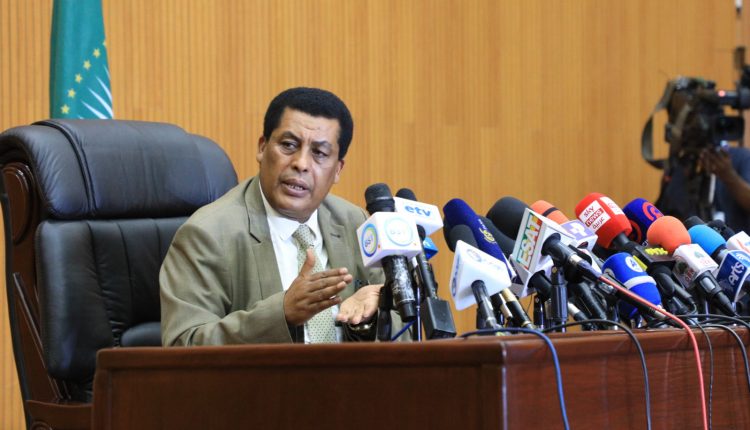 Some factories in Tigray start exporting products, schools to reopen across region

Addis Ababa, June 10, 2021 (FBC) – In a biweekly press briefing today, Spokesperson of Ministry of Foreign Affairs, Ambassador Dina Mufti said that some factories in the region, including textile and cement factories have already started operation and exporting products.

The military, the federal and regional justice systems are working in concert, where 60 suspected soldiers were brought to justice, of whom some are convicted and sentenced subsequently, Ambassador Dina said.

Among the challenges observed in the region, he said, the most crucial ones are the unverified reports that misrepresented the facts on the ground and misunderstandings by humanitarian partners on the security concerns of military personnel at some checkpoints as facts for denial of access to the region.

Ambassador Dina stated that the process of withdrawing Eritrean troops has already begun adding that TPLF is not in a position to fight the Ethiopian Defence Forces although it sparks sporadic clashes at very few pocket areas.

“By causing troubles in some pocket areas, such as the West of Maichew, Bora, and Temben, the terrorist group has tried to impede access to humanitarian support envisaging famine in the areas as a political strategy to garner support from aggrieved people”

The Ethiopian Defense Forces are well known for taking military discipline very seriously as witnessed in serving in various UN peacekeeping missions, and there is no reason for Ethiopian soldiers to go wild and be lenient when it comes to protecting the well-being of our own people in Tigray, he added.

Quests by the humanitarian agencies to possess gadgets that should only be restricted to military personnel are not acceptable, he stressed.

The government should have announced the misuse of privileges by some aid agencies that were caught while attempting to transport ammunition to the terrorist group and unduly repressing and firing Ethiopian staffers in their organizations.

Federal and regional governments have been using their scarce resources to rebuild most of the infrastructures and public services, such as telecommunication, electricity, banking, and financial services that were destroyed by TPLF.

“So what the people of Tigray need now is material and financial support, The meeting also discussed the possibilities of opening Shire and Humera Airports, including the modalities required to extend visas granted to aid agencies”, Ambassador Dina remarked.

Education in Mekelle has already started and about 32 public and 30 private schools have resumed the teaching-learning process, he said adding schools in other parts of Tigray will be opened soon.

“Agricultural activities are well underway in the region. But there are gaps between the demand for improved seeds and fertilizers which needs concerted efforts between stakeholders”, he indicated.