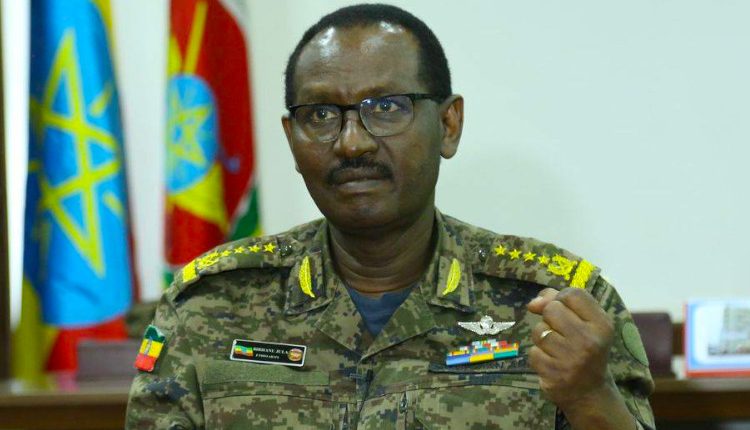 Sudan should avoid trap set by third party, commit itself to negotiation: Army Chief of Staff

Addis Ababa, January 20, 2021 (FBC) – Chief of Staff of the Ethiopian National Defence Forces, General Birhanu Jula said that Sudan should avoid the trap set by third party to lead it in to war and commit itself to resolve its border dispute with Ethiopia through negotiations.

The Chief of Staff of the army said Ethiopia and Sudan have a longstanding friendship not challenged by their internal problems highlighting Ethiopia role in resolving political disorder Sudan encountered a year before.

He stated that the Sudanese army breached territory of Ethiopia while the country was undertaking law enforcement operation in Tigray. The border transgression commited by Sudan is contrary to the longstanding fraternity between the two nations, he said.

There is a third party behind the Sudan’s encroachment in to Ethiopia’s territory that intends to disrupt the construction process of the Grand Ethiopian Renaissance Dam (GERD), General Birhanu stressed.

The element behind the border transgression has taken advantage of the political transition in Sudan and the law enforcement operation carried out in Tigray, he said.

Border issues between Ethiopia and Sudan are not strange phenomenon and have been getting through peaceful mechanisms, the General said, adding that the current dispute is magnified due to involvement of a third party.

Ethiopia is committed to resolve the dispute through peaceful ways for it does not intend to into war with its brotherly country Sudan, he underlined.

General Birhanu urged that Sudan should avoid the trap set by third party to lead into war and commit itself to resolve the problem with peaceful mechanism.

According to General Birhanu, an arrangement is set to hold negotiations between the two countries at military level.

General Birhanu Jula further underscored that  the army has been contributing its share in rehabilitation activities in Tigray besides its mission to hunt for culprits of the TPLF Junta.