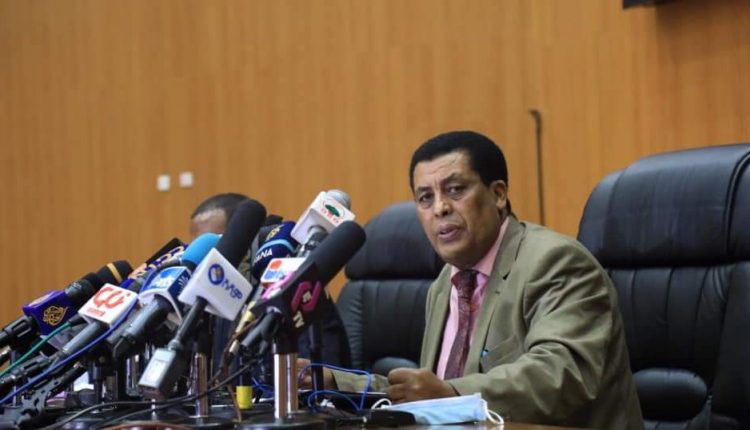 Addis Ababa, July 29, 2021 (FBC) – Spokesperson of Foreign Affairs, Ambassador Dina Mufti, in the Ministry’s biweekly press briefing briefed the media with a special focus on latest developments in the country and the repatriation of Ethiopians from the Kingdom of Saudi Arabia and several diplomatic activities.

Regarding the current situation in the northern part of the country, Ambassador Dina Mufti said that TPLF has continued discrediting the unilateral humanitarian ceasefire endangering the people of Tigray and particularly farmers.

The terrorist group is launching fresh attacks in different areas bordering the region with Amhara and Afar endangering the spirit of the ceasefire, he said, calling the international community to force the TPLF to respect the ceasefire.

On the other hand, he noted GERD is a development project and attempts to internationalize and securitize it is not helpful to negotiating parties, he explained, adding that Ethiopia is still consistent that the AU-led tripartite talks over the GERD should continue soon.

The international community should tell Sudan to withdraw its troops from Ethiopian territories and keep the status quo of the 1972 Exchange of notes between the two countries.

Ethiopia-Sudan border dispute shall be resolved only through peaceful means

The UN Secretary General appreciates the Ethiopian Government’s declaration of humanitarian ceasefire and wants the other side to respect that too, he underlined.

Ambassador Dina said Ethiopia has repatriated more than 41,000 compatriots from Saudi Arabia during the past two weeks.

He added, since November 2017, the Government of Ethiopia has facilitated the return of 415,000 citizens from the Kingdom of Saudi Arabia, Ambassador Dina explained, adding that many of the migrants were detained in Saudi Arabia for immigration offenses.

The Government of Ethiopia’s embassy and consular officials in Saudi Arabia regularly visit detention centers to assess the citizen’s wellbeing and facilitate their return to their families across the country.

In Addis Ababa, the Government in cooperation with humanitarian partners such as IOM, ERC, and MSF Spain established an operation to provide humanitarian assistance on arrival and facilitate a safe return to home communities.

On arrival, the migrants are assessed for vulnerabilities and special needs and referred accordingly. Unaccompanied and separated children were reunified by the government following family tracing and best interest determination.

To help our citizens rebuild their lives in Ethiopia, the Ministry of Labour and Social Affairs is working with development actors to provide reintegration support for some of the migrants. Others have been referred to the private sector for job opportunities.

The Government under the leadership of the Office of the Attorney General has strengthened the laws and created partnerships needed to combat human trafficking and illicit migrant smuggling.

Most of the migrants are smuggled to transit countries and exposed to human rights violations and deprivations. The Immigration Agency is undertaking concerted efforts to strengthen border management and reduce smuggling and human trafficking.

In June 2021, our government and the Kingdom of Saudi Arabia agreed to prioritize the repatriation of Ethiopian nationals subjected to prolonged detention due to mobility restrictions resulting from the COVID-19 pandemic.

The ongoing hostilities in Tigray have made it logistically impossible for many migrants to return to their homes in that region. The affected returnees are helped to reunify with extended family in peaceful parts of Ethiopia.

Those who do have family members to reunify with are being provided longer-term stays at dedicated reception centers until such a time when their return to Tigray is feasible and safe.

The Government of Ethiopia is working with relevant authorities in Saudi Arabia to avoid arbitrary detention of Ethiopian citizens, provide protections to property, facilitate a dignified return for voluntary migrants and work on the expedited full implementation of the labor agreements between the two countries.

Members of the Ethiopian Community Association in Riyadh, Saudi Arabia, in collaboration with the FDRE Embassy in Riyadh have provided food and non-food items to 1221 Ethiopians at a women’s migration Center in Riyadh, he added.