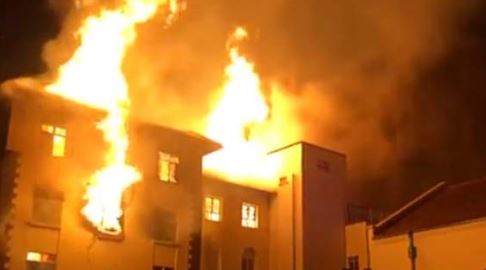 Addis Ababa, September 21, 2020 (FBC) – A policeman and a private security guard have been arrested in Uganda, as police investigate the cause of the fire which gutted an iconic building at Makerere University.

Investigators are looking into whether there was a lapse in security at the building or if officers absconded from duty, said polic spokesman Fred Ananga.

Known as the “Ivory Tower”, a blaze in the early hours of Sunday left the building’s distinctive white walls with blue-shuttered windows blackened.

Investigators have so far been unable to access the entire enterior of the building. It is considered risky because several of the walls have developed cracks, and whole floors were burnt out.

Financial records and numerous valuable documents are believed o have been burnt to ashes.

Authorities say that the destruction caused by the fire will not affect measures being put in place for the re-opening.