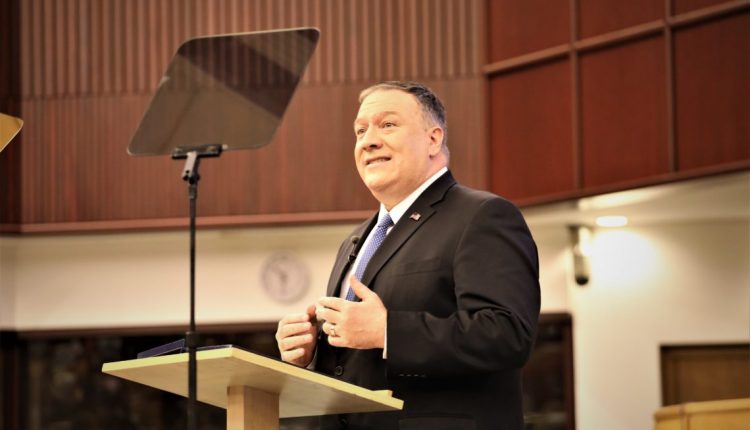 Good morning everyone. Vera, thank you. Thank you for the kind introduction. Thank you all very much for welcoming me. Let’s see, there we go. Vera, I think we got the lapel mike. Here we go. Good morning. Really, good morning again. It’s great fun to be here with you all. This is very special. I’m in a very special place. I’m happy to be here with my wife Susan and the team that’s come along with me. I have been humbled on my entire trip by the astounding warmth and the generosity of all the people of Africa and especially here in Ethiopia. It’s great to be here.

I just left a amazing discussion with some really awesome entrepreneurs and business leaders, and I hear we’ve got a few more of you in the audience today. I’m a former entrepreneur. I love what you do. I love risk takers. I love those people who are willing to go out and just crush it every day.

With us here today are three very special ladies. Azalech Tesfaye is right here. She has a coffee business that employs 50 people and exports all across the world. Her business has been able to expand thanks to a loan from the White House’s Women’s Global Development and Prosperity Initiative. Azalech, I’m glad you could be with us here today. Thank you for joining us.

Also with us is Meseret Warner. Very nice to see you. It was wonderful to meet you this morning. She is developing a crowd funding platform to channel capital from the United States to businesses in Ethiopia, and throughout Africa. Don’t take all of our capital, all right. Best of luck to you.

We at the State Department are proud that Ethiopian chapter president of the Africa Women’s Entrepreneurship Program is here.

And then we also have Samrawit Fikru. She’s with us as well. She founded RIDE, Ethiopia’s version of Uber. She’s created jobs for more than 11,000 drivers and 300 permanent employees. That’s amazing. Congratulations. (Applause.) She’s a distinguished alumnus of one of the State Department’s great international programs, the International Visitor Leadership Program.

Let’s give all of these amazing entrepreneurs one more big round of applause. Congratulations to you.

Stories like this, success stories, entrepreneur stories like this remind me of America’s founding too. These aren’t just feel good moments,. They define a nation’s future. These entrepreneurial activities will define Africa’s future, too.

We believe that in the United States. I believe that. I believe, as I know most of you do, too, that every human being – African, European, American, you name it – wants similar things.

We want basic security for our families. We want opportunity and reward for the hard work that we invest in. And we want the freedom to do whatever we want to do with our own lives.It’s how we get there that matters an awful lot.

I’m here today about – to talk to you about a couple of things. Most importantly, I want to talk about the next liberation, economic liberation, a true liberation for Africa’s entrepreneurs. I’ll talk about this briefly, then I’m going to take questions from Vera.

Look, for starters, I think we can all agree that the poverty rate in many African countries remains way too high.
And while effective foreign aid can help to alleviate the problem, it’s very unlikely that it will solve it. We see this in places all across the world, even in America. Government spending often can’t attack the very basis of the problem.

Centralized planning hasn’t worked – look at the failed socialist experiments of years past in Zimbabwe, in Tanzania, and right here in Ethiopia. Even now, even as we stand here today, South Africa is debating an amendment to permit the expropriation of private property without compensation. That would be disastrous for that economy, and most importantly for the South African people.

But we all – everyone in this room – everyone in this room know the right way forward. Basic strong rule of law, respect for property rights, regulation that encourages investment – we talked about that with these entrepreneurs this morning. You need to get the basic laws right so that investors can come and invest their capital. We also need women’s full participation in this economic liberation. And we need governments that respect their own people. These are the fundamental ingredients for true and inclusive, sustainable economic liberation.

We all know the history of the Asian Tigers. The Asian Tigers lifted themselves up in a span of just a few decades, because they liberalized and they opened for trade.

That can happen right here too – and indeed, I would argue that it must. More than 60 percent of the population in Africa is under the age of 25. Only nations hospitable to the private sector will stimulate enough growth, enough opportunity, enough resources, enough capital that will deliver jobs and prosperity on the scale that this continent needs and over the timeframe that it requires.

And to African leaders today – future generations are depending on stable, corruption-free environments that attract foreign investment.

As the Ethiopian proverb says, “A partner in business will not put an obstacle to it.”

Togo has knocked down similar bureaucratic hurdles on fees, wait times, permitting, and other impediments for business owners.

On a broader scale, I just came from Angola, where President Lorenco and his team are courageously turning the page on corruption and are privatizing hundreds of state-owned businesses.

None of this is easy. If it was easy, it would have happened long ago. The United States recognizes this.

But it’s moral, and it’s right. And it’s necessary. There is nothing more noble than allowing our people to have the dignity of work. And the United States, you should know, everyone – we believe in you, and we’ll be with you every step of the way.

With the right policies and leadership, we believe that true economic liberation will happen here in Africa.

If you will all focus on the basics – if you’ll get it right, if you’ll get transparency right, good governance right – American businesses will come. We’ve been in Africa for an awfully long time. More capital will flow.

Just these last few days in Senegal, we signed an agreement where Bechtel, America’s – one of America’s finest engineering companies, will build a road from Dakar to St. Louis, transforming infrastructure and creating opportunities. I was proud to be part of the signing ceremony there in Dakar, along with the signing of four other major agreements with American businesses that are going to invest in Senegal and in the Senegalese people.
In Angola, Chevron and others are exploring offshore natural gas fields, bringing jobs and economic growth right along with them. When American capital comes, it hires local.

Here in Ethiopia, Coca-Cola is expanding a new $300 million investment, and companies like FedEx and Citibank are exploring new opportunities as well.

As for the American Government, the Trump administration wants these trade ties to continue and to expand. We’re committed to it.

That’s why the United States launched our new Development Finance Corporation. I’m sure I’ll get a chance to talk more about this with Vera. It’s now just one month old, but it’s well-resourced, well-funded, and well-structured. The goal is very simple. The goal is to catalyze private sector investment in developing countries, focusing heavily on priority areas like agriculture, like energy, and infrastructure. Sixty billion dollars of capacity, $60 billion of finance capacity, it will help here in Africa.

And there’s more. The U.S. under President Trump launched Prosper Africa – the Prosper Africa initiative, which is opening opportunities for businesses on both sides of the ocean.

We are pushing forward, too, the W-GDP program, with the goal of economically empowering at least 50 million women by 2025. We expect more than half of those women to be right here in Africa.

USAID, one of our traditional assistance mechanisms, is integrating the private sector into its core development work in ways that it’s never done before.

We support the African Continental Free Trade Area, and we remain committed to our partnership with the African Union.

Look, not every nation doing business in Africa from outside the continent adopts the American model of partnership. Countries should be wary of authoritarian regimes with empty promises. They breed corruption, dependency, they don’t hire the local people, they don’t train, they don’t lead them. They run the risk that the prosperity and sovereignty and progress that Africa so needs and desperately wants won’t happen.
Real simple. The United States stands for local jobs, environmental responsibility, honest business practices, high-quality work, and mutual prosperity.

Don’t take my word for it – look at the facts, look at the history. We stand for true partnership, true economic liberation.

I want to save plenty of time to have a conversation with Vera today, so I’ll close up quickly.

So many of you here today I can see from all walks of like – we’ve got entrepreneurs, political leaders, media voices, I’ve got a group of alumni from State Department programs ‒ you, you are the forces that will ensure that those with power who promise liberation understand what that truly means. Hold onto that.

True economic liberation delivered the greatest economic growth in human history in the United States of America. It can do the same for you.

My country will proudly walk that path in partnership with you.

I look forward to our conversation today.

And may God bless all of you.

And God bless all of the people of Africa.