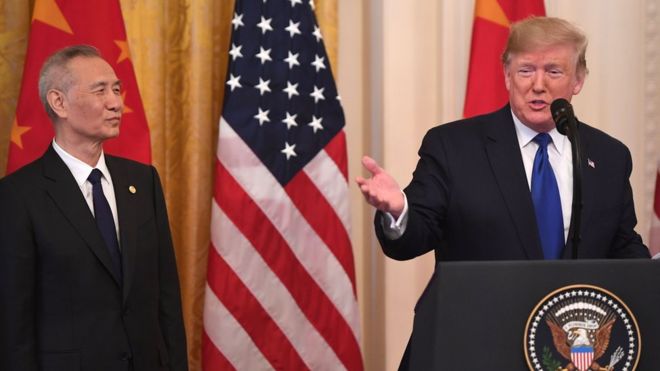 US and China sign deal to ease trade war

Addis Ababa, January 16, 2020 (FBC) -The US and China have signed an agreement aimed at easing a trade war that has rattled markets and weighed on the global economy.

Speaking in Washington, US President Donald Trump said the pact would be “transformative” for the US economy.

Chinese leaders called it a “win-win” deal that would help foster better relations between the two countries.

China has pledged to boost US imports by $200bn above 2017 levels and strengthen intellectual property rules.

In exchange, the US has agreed to halve some of the new tariffs it has imposed on Chinese products.

However the majority of the border taxes remain in place, which has prompted business groups to call for further talks.

The US and China have engaged in a tit-for-tat tariff war since 2018, which has led to extra import taxes being levied on more than $450bn (£350bn) worth of traded goods.