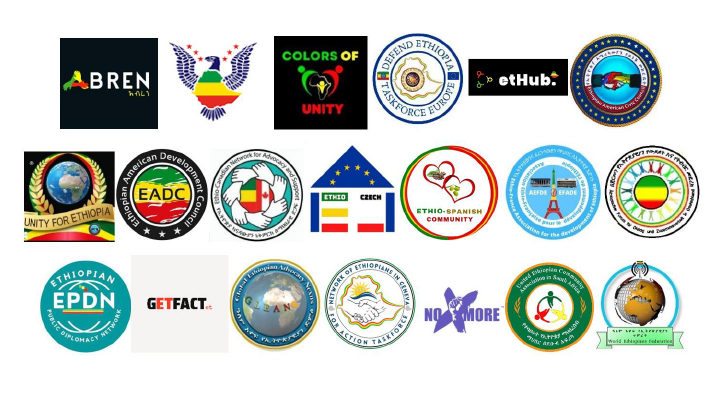 Addis Ababa, November 24, 2022 (FBC) – Ethiopian Organizations across the world organized as a Consortium, with members including Ethiopians and citizens of European countries, the United States and Canada expressed their renewed support on the peace accord and its implementation process.

In the statement, the consortium welcomed the peace agreement signed by the Government of Ethiopia and TPLF in South Africa on November 2, 2022.

The Consortium also noted the follow-up declaration of the Senior Commanders of the FDRE government and TPLF on the modalities for the implementation of the agreement for lasting peace through a Permanent Cessation of Hostilities in Nairobi on November 8th, 2022.

It also expressed its strong support to the principle of “African Solutions to African Problems” as demonstrated by the successful conclusion of an exemplary breakthrough peace deal discrediting some individuals, governmental and non-governmental entities who openly doubted the AU’s capacity to lead such a process.

The statement indicated that the Organizations deplored some faction of the TPLF and its supporters in the Diaspora, some foreign parliamentarians and congressmen, media houses, individuals in think tanks and academic institutions have engaged in anti-peace rhetoric, making false and inflammatory comments unconducive to ending the two-year-long suffering of the people in Ethiopia, particularly those in Afar, Amhara and Tigray;

The Consortium also encouraged the Government of Ethiopia’s structures at all levels to focus on the dividends of peace, expedite efforts of rehabilitation and reconstruction, deliver on the commitment to restoring services and coordinating with humanitarian agencies the provision of humanitarian supplies to the areas in Tigray under its control, whilst remaining vigilant, verifying the commitment of the TPLF to disarm.

Furthermore, the Organizations also reiterated their call to the international community to actively support the peace agreement and focus on long-term, strategic and mutually beneficial partnership with Ethiopia.

The Consortium also called on peace spoilers who have been echoing misinformation to uplift and encourage the peaceful solutions ahead and stop spreading uncorroborated accusations and smears; especially some media houses, think tanks, academic institutions, human rights advocacy groups and NGOs.

The Consortium urged TPLF leaders to stop their incoherence in explaining the peace treaty, releasing misleading press statements addressing the population in local languages, to urge the Tigray Community in Diaspora to embrace the agreement as a lasting peace is the only pathway to end the suffering of the People of Tigray, Amhara, Afar and the rest of Ethiopia.

It also further called on the Ethiopian Diaspora at large to engage in promoting the attainment of peace through the implementation of the peace deal, and to intensively engage in rebuilding efforts of communities and infrastructures that have been devastated by the war, as well as helping in the rehabilitation of combatants on both sides.