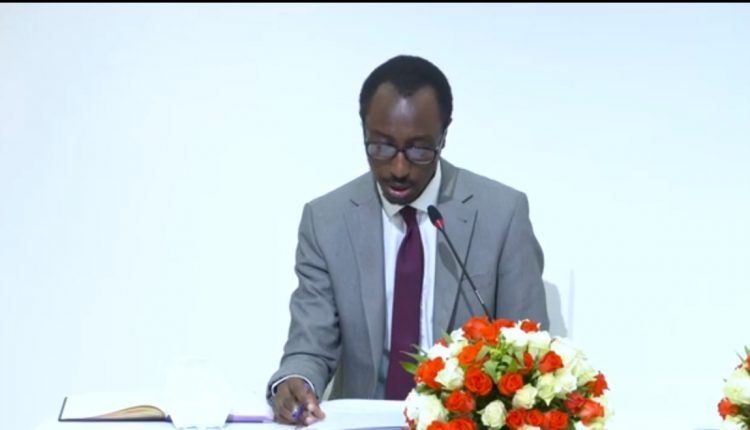 Charges pressed against 53 members of ENDF over alleged killings of civilians, sexual assault

Addis Ababa, June 3, 2021 (FBC) – While briefing international media on the ongoing legal activities in Tigray and other parts of the country, the Federal Attorney General Dr. Temotiwos outlined activities related to investigations and prosecutions against the TPLF as well as members of the National Defense Forces who have been suspected of alleged crimes.

The Attorney General Dr. Temotiwos said the TPLF through its leadership established the Tigray military command and this military outfit was organized, staffed and commanded by retired generals from the Ethiopian national defense force.

This illegal force had 8 divisions and one mechanized unit and 23 regiments. The terrorist TPLF has played an active role in organizing and financing this illegal force, he said.

The TPLF also organized, armed and financed different armed forces in different parts of the country including the Afar, Oromia, Amhara and Benishangul regional states to destabilize the nation.

Dr. Gedion explained that on November 4, 2021 the illegal force organized by the TPLF group attacked the Northern Command of the National Defense Force. The illegal force also attacked the federal police in Mekelle city and other places and demolished several infrastractures in the region.

aimed to destablize 53 troops of the National Defence Force have been accused of murder of civilians and secxual assualt.

Federal prosecutors are currently in the process of having such evidence recorded by the federal first instance court. Once we have finalized the process of entering these evidences and testimonies, the appropriate charge will be pressed at the federal igh court.

The above set of facts which have been ascertained by investigations constitute serious crimes. Several suspects who have belived to have had in the commission of these crimes are belived to outreached the constitutional order, armed uprising and civil war impairment the defensive power of the state and crime of terrorism.

The other focus of investigation and prosecution is focused at the killing of civilians and cases of secxual assaults or rape.

The Ethiopian National Defense military prosecutors and the police have conducted their own investigation and so far they have pressed charges against 28 soldiers who have been suspected of killing of civilians in places where there were no military necessity. The trial of these suspects are underway and things are expected to be handed down shortly.

Furthermore, the military prosecutors have pressed charges against 25 soldiers who have been suspected of committing acts of sexual violence and rape. The trials of these suspects are also underway, he added.

So far there have been four convictions and several investigation that are well underway, he said. Regional police and prosecutors have also received several complaints and sexual assault in several parts of the regional state.

In connection with the Maikadra massacre, 200 witnesses were taken and after examining forensic results using a medical team of forensic experts, the investigation team has ascertained that more than 200 individuals have been killed and several victims have sustained severe serious injuries.

He further reiterated the commitment of the federal government to ensure accountability for all violations of pertinent local and international laws.