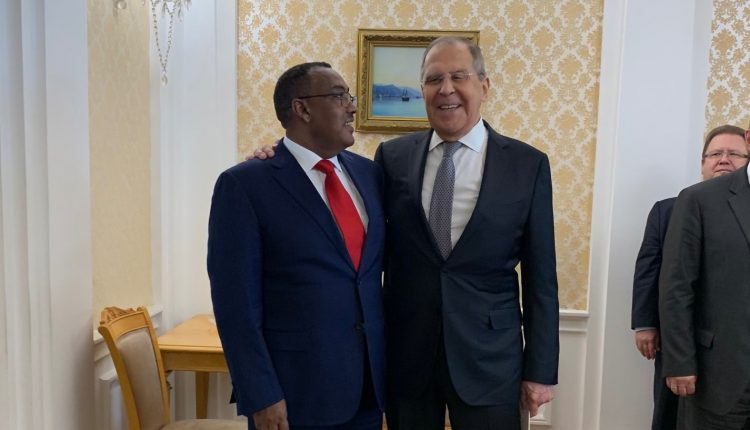 In his opening remarks, Sergey Lavrov said that his country values the regular top- and high-level political dialogue with Ethiopia and the continent Africa at large.

He recalled that principal agreements were reached between Russia and Ethiopia within the framework of the Russia-Africa Summit in Sochi in October 2019.

“Vladmir Putin, President of Russia, met with Abiy Ahmed, Prime Minister of Ethiopia. They discussed the bilateral agenda; we have a lot of promising projects that are meant to significantly increase trade and economic cooperation as a whole.” he said.

Russia is very interested in continuing our mutually beneficial cooperation and coordination in the international organizations, first and foremost in the UN, where we actively support each other and put forward joint initiatives. Undoubtedly, it is very important for us to hear your assessment of the situation on the African continent and the activities of the African Union, the headquarters of which are situated in Addis Ababa, Sergey Lavrov noted.

“I know that you are interested and actively involved in the preparation for the second Russia-Africa summit 2022” The Russian Prime Minister underlined.

Deputy Prime Minister Demeke Mekonnen, to his part, briefed the Russian side on the current situation in Ethiopia.

He said efforts are underway to rehabilitate law enforcement in the Tigray region, provide unlimited humanitarian assistance, facilitate access to humanitarians, and investigate allegations of human rights abuses and bring perpetrators before justice.

Regarding the general elections, he said it was conducted in a peaceful manner and the results of the counting will be made public according to the program of NEBE.

The two sides also talked about the Ethiopia-Sudan border dispute where the Deputy Prime Minister said Sudan’s use of the situation in the Tigray region as an opportunity to encroach into Ethiopian territory was not only illegal but also an immoral act that failed to reflect the longstanding relationship between the two countries.

He reaffirmed that Ethiopia’s efforts to resolve the border dispute with Sudan peacefully would continue.

According to Demeke, the Ethiopian people and government appreciate Russia’s continued support and commitment to Ethiopia’s sovereignty adding that Ethiopia is confident that this support would continue.

The Deputy Prime Minister also announced that Ethiopia is ready to host the Africa-Russia Forum in Addis Ababa next year.

Russian Foreign Minister Sergei Lavrov, on his part, said the steps taken by the federal government of Ethiopia in handling the situation in the Tigray regional state, including its commendable humanitarian assistance efforts are testaments to the moral and political competence of the government.

He noted that Russia’s participation in the Sixth National Elections as an observer was reflective of the long and historical relationship between the two countries adding that his country is satisfied with the peaceful conclusion of the election.

He said Russia believes that the ongoing negotiations under the auspices of the African Union (AU) regarding the Renaissance Dam should be strengthened and Russia is interested in providing the necessary technical support.

He also lauded Ethiopia’s approach to peacefully resolving the border dispute with Sudan and resolving problems through diplomacy.

Russia does not support any intervention in Ethiopia’s internal affairs, he said, affirming that the areas of cooperation between the two countries will continue to be strengthened.

Sergei Lavrov also appreciated Ethiopia’s stance for being ready to host the Africa-Russia Forum in Addis Ababa next year.

They stressed the need to expedite the implementation of agreements that have been reached so far and called for the speedy signing of agreements in other areas that the two countries have agreed to expand engagements.

The discussion between the two sides was fruitful and ended with their affirmation of commitment to continue the historic relationship between Ethiopia and Russia in various fields.