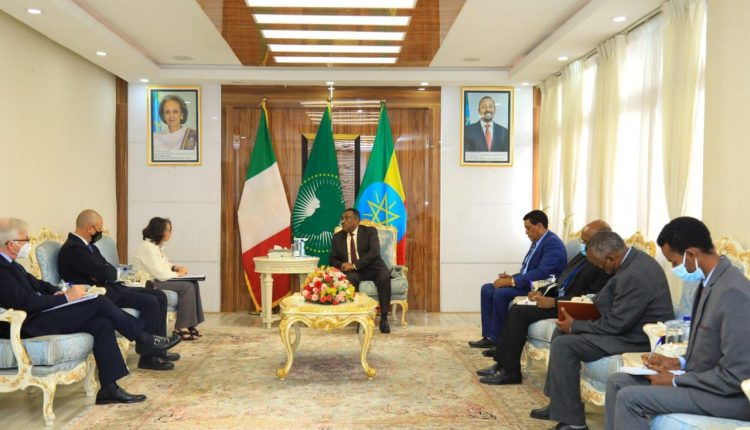 At the onset of their discussion, the Deputy Prime Minister and Foreign Minister thanked the government of Italy for its uninterrupted development cooperation with Ethiopia.

He also appreciated the outstanding construction works of “We build” (former Salini Impregilo) in Ethiopia, a company involved in the construction of the Grand Ethiopian Renaissance Dam too.

Speaking on the current situation in Ethiopia, the Deputy Prime Minister and Foreign Minister described all of the positive measures that the government of Ethiopia has been undertaking to peacefully end the conflict in northern Ethiopia and establish long-lasting peace in the country.

In this regard, he mentioned the federal government’s decision to withhold its troops from entering the Tigray region, the release of high-profile political figures from prison, and the decision to establish the National Dialogue Commission paving the way for national consensus.

Demeke stressed Ethiopia’s commitment to peace, mentioning the federal government’s commitment to act according to the recommendations of the joint investigation of the Ethiopian Human Rights Commission (EHRC) and the UN Human Rights Office into alleged crimes committed in Tigray.

He said the government of Ethiopia wants the UN and the Ethiopian human rights institutions to conduct similar investigations into the atrocities committed by the TPLF in the Amhara and Afar regions.

In line with the concerns of the international community and the responsibility of the federal government, he explained all the efforts made to provide unfettered humanitarian access to the Tigray region.

Despite all the encouraging steps taken by the federal government, the Deputy Prime Minister and Foreign Minister said the TPLF failed to reciprocate and continued its provocative acts, mentioning the recent attacks on Afar.

The TPLF has continued to massively recruit and train troops to further exercise its warmongering agenda on the neighboring regions disregarding peace efforts, he added.

He said the International community, including Italy, should not be bought into the victimhood narratives of the TPLF that often use deception to conceal its anti-peace character.

The Deputy Minister of Foreign Affairs and International Cooperation of Italy, on her part, thanked Demeke for his briefing on the current situation in the country and for addressing the humanitarian and human rights concerns of Italy.

She said her government appreciates all the encouraging efforts of the government of Ethiopia to build peace in the country.

Marina Sereni further said Italy wants to keep on expanding its development partnership and diplomatic relationships with Ethiopia, an anchor state in the region.

The discussion between the two sides was concluded in mutual understanding and pledges to further cement ties.