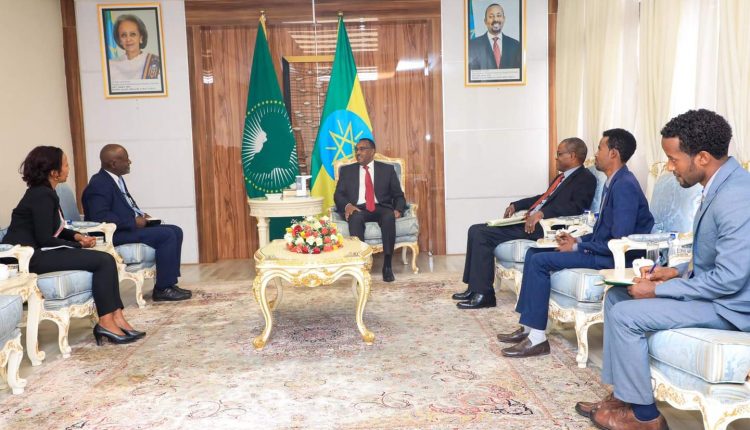 The Deputy Prime Minister and Foreign Minister appreciated the WFP’s continued humanitarian assistance to people affected by manmade and natural disasters in Ethiopia.

He said the federal government is exerting efforts to support the more than 20 million Ethiopians who suffer from conflict and drought.

Given the gravity of the situation, the Deputy Prime Minister and Foreign Minister stressed the need for expedited emergency relief support to affected Ethiopians from humanitarian partners like WFP.

The two sides also noted the federal government’s encouraging efforts in transforming wheat production in Ethiopia, which paves the way for self-sufficiency.

Appreciating the indefinite humanitarian truce, Mr. Claude Jibidar said the WFP is accelerating its humanitarian works in all areas affected by the conflict and drought in Ethiopia.

In connection with that, the Deputy Prime Minister and Foreign Minister requested the WFP to condemn the TPLF’s aggressions against adjacent regions, which continued to threaten the encouraging humanitarian works.

Noting that Ethiopia hosts more than 900,000 refugees in addition to caring for its internally displaced people, the WFP country representative reaffirmed his organization’s continued support for Ethiopia.

As an anchor state in the region, encouraging peace and development in Ethiopia inspire countries in the horn region to follow suit, he said.

The WFP country representative said he would meet leaders of Ethiopian humanitarian relief agencies in a bid to expand activities of the WFP in Ethiopia.