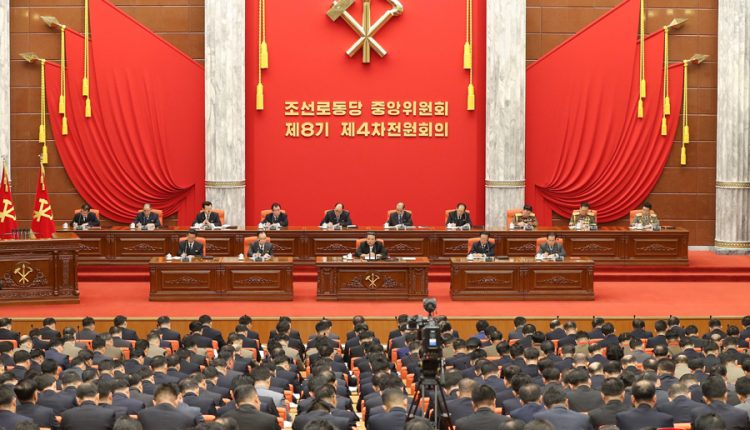 DPR of Korea prioritizes prosperity and development in future endeavors

“Noting that at the point of reviewing the year’s work with pride, we should first analyze with subtlety what could be lessons, he said that the main purpose of the convocation of the plenary meeting is to make some lessons learned by us an engine further supplementing and completing the revolutionary policies and raise our bigger potentiality for development. He added that herein lies the great practical significance of revolutionary development.” The President noted.

“The Party Central Committee admitted that this year’s successes and experiences should actively be promoted and amplified as they represent precious lessons and the devoted efforts and as they require full display of unusual responsibility and strenuous efforts, and that the overall development of socialist construction should be hastened with greater successes and victory by discharging heavy responsibility and generating maximum creativity in discussing the plan for the new year.”

“The construction of 10 000 flats in the areas of Songsin and Songhwa nearing completion as another massive residential area is the first eye-opening event that showed in actuality the prospect for the perfect settlement of housing problem in the capital city in the period of five-year plan.”

The completion of the third-stage Samjiyon City project produced an ideal and valid experience for confidently pushing ahead with the long-term grand construction to transform local areas across the country, Kim Jong Un said.

The construction of 5 000 dwelling houses in the area of Komdok made successful headway, the rehabilitation from flood damage was satisfactorily conducted in South Hamgyong Province and North Hamgyong Province and new architectural shapes were introduced and new ideas were created in lots of projects including the construction of modern terraced residential district. This indicated that our architecture has leapt one step higher and the era of great prosperity in construction keeps flourishing.

The electric power and coal industrial sectors responsible for supplying power to the national economy conducted an effective production campaign to powerfully haul the overall economy. The building materials industrial field and machine, mining, forestry, land and marine transport and railway transport fields supported the nationwide construction and production surge. All these mean an improvement of one step forward in implementing the plan for this year.

Plan discipline was established in the economic field and leading economic officials have shown obvious improvement in their work style. This becomes a powerful guarantee for further advancing the economy and the state affairs in the future.

The mentality and awareness of all the people desirous of socialist life and development has grown stronger than before, fully displaying the might of collectivism in practice.

The Party Central Committee assessed that the tendency to bring about fresh innovation, bold creation and steady progress was vividly manifested in the work for this year and a turn was effected in establishing the Party traits like strengthening the organizational discipline of the Party and carrying out the Party’s decisions.

The entire Party and the whole country should concentrate efforts on the farming and give manpower and material support to the rural communities. And the agricultural sector should increase the grain production by doing all the farm works in a sci-tech way and positively use farming machines now that the area to grow wheat and barley has been expanded.

In the economic work, capital construction should be prioritized and new construction revolution for fundamentally changing the living environments of the people should be made so as to continue to usher in the heyday of the capital city construction including the building of 10 000 flats planned for 2022 and open an era when the local areas will change.

The light industrial sector should set it as an important task to reenergize the production of consumer goods and push ahead with it. And it should put the foodstuff processing technology on a higher scientific basis.

Saying that the supply of school uniforms and things to the students across the country at the state’s expense is a consistent policy of the Party and the state, the General Secretary set forth a task for supplying all the students with quality uniforms and bags of new forms without exception and took an important measure of the Party Central Committee for implementing it.

He stressed the need for the fishing industrial sector to conduct a work for catching more fish, do fish breeding and culture well and increase marine resources in an effective way to better the people’s diet.

Mentioned in the conclusion were tasks for the mining industry, forestry, IT industry and other sectors to make positive contributions to the national economic development by practically advancing their work.

The land administration and city management sectors should push ahead with afforestation, river improvement and anti-land-sliding projects the year round, aiming at thoroughly protecting lives and properties of the people and the land of the country. They should push forward under plan the work to ensure security and modernity of roads, protect and improve the ecological environment and create green landscape in streets and villages.

He stressed need to propel the work to adjust and reinforce the material and technical foundations of the national economy.

It set forth important tasks for promoting the overall development of socialist construction by making innovation in the work of the field of culture including science, education and public health.

At present, a major task facing the field of science is to clearly specify the scientific and technical measure for developing the overall affairs of the country including the economy in a balanced and simultaneous way.

Scientific and research units should select as their main tasks the development and completion of technologies having an urgent significance in enhancing independence of the state economy and improving the standard of people’s living, and all the sectors and units should give precedence to the training of their own scientific and technological forces before production and construction.

The educational sector should set it as the main objective of educational revolution in the new century to train all the school children as genuine revolutionary talents, competent and creative talents and reserves of socialism by developing our education into the most advanced and ideal one for the future.

For this, it is necessary to further strengthen the meritocratic educational system and train a large number of good scientific and technological talents who can be core and traction engine in several fields including the economy and the national defence, strengthen the ranks of teachers in local areas and farm villages in a qualitative and quantitative way and push forward the work to modernize the educational conditions and environment so as to put the overall educational level of the country on a higher level.

Noting that the noble and highly-civilized life style and moral traits based on collectivism serve as foundation of our style socialism and powerful vitamins for its advance and development, the General Secretary said that the fine virtues and noble traits peculiar to our people being fully displayed day by day should be made social and national customs.

The conclusion stressed once again that the emergency epidemic prevention work should be made a top priority in the state work and it is the most important work to be powerfully conducted with no allowance given to slight slackness, pores and drawback.

The General Secretary underscored the need to powerfully speed up rural revolution with confidence and optimism, turn all the farms in the country into socialist paradise wonderful enough to be proud of in the world and realize centuries-old desire and ideal of the people as soon as possible, clarifying detailed tasks and ways for doing so.

Powerfully expediting the three revolutions-ideological, technical and cultural- in the countryside is the most important task arising in settling the socialist rural question.

The purpose of the ideological revolution in farms is to remove old thought remaining in the heads of agricultural workers, turn them into communists who have been revolutionized and armed with the Juche idea, and consolidate our revolutionary force politically and ideologically and thus powerfully propel socialist construction, it is indicated during the meeting.