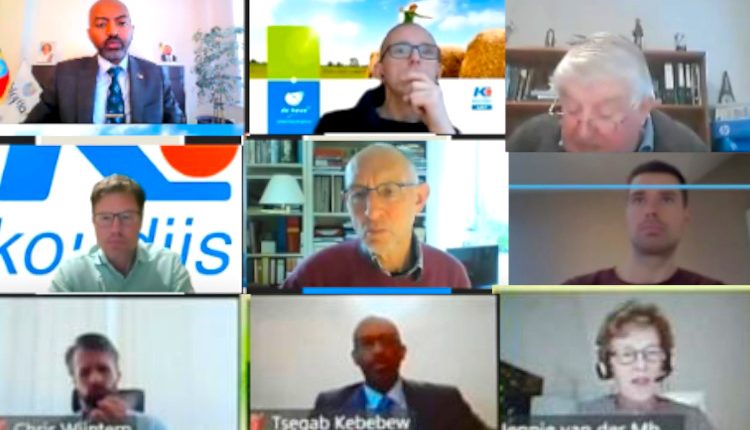 The promotion webinar entitled “Ethiopia: Focus on Agricultural Investment” was attended by over 50 individuals composed of Dutch companies and sectoral associations, Dutch business promotion organizations and financial institutions, as well as government officials from Ethiopia and the Netherlands.

In his opening remarks, Ethiopia’s Ambassador to the Netherlands, Ambassador Million Samuel, noted that agriculture is a priority sector for Ethiopia under its extensive reform.

He underscored that the sector has already attracted many Dutch businesses to Ethiopia, particularly in horticulture and floriculture, but there is still potential for more.

Delivering a keynote speech on behalf of State Minister, Tsion Teklu, Ambassador Ababi Demissie, Director General of Foreign Investment and Technology Transfer in the Ministry stated that due to the series of reforms underway in modernizing and creating a technologically adaptive agriculture in Ethiopia, the sector has become conducive for investment more than ever before.

State Minister of Agriculture, Wondale Habtamu, on his part, appreciated the already existing partnership with the Netherlands government and Dutch companies in the area of knowledge transfer in particular the Flying Swans, an agro-logistcs project which facilitates refrigerated export of Ethiopian fruits and vegetables to Europe.

He further invited Dutch businesses to make use of the available opportunities and the best policy environment.

Addisu Biazen and Rediet Yihalem, Senior investment promotion officers from the Ethiopian Investment Commission further provided an overview of priority areas in agriculture including sesame, dairy, animal feed and poultry, incentives provided to investors as well as the support availed by the Commission to investors.

Meeuws Brouwer, Agricultural counselor in the Embassy of the Netherlands in Addis Ababa noted that there are 85 Dutch companies in Ethiopia of whom 80% are engaged in agriculture.

He underlined that horticulture, poultry, dairy and agribusiness are focus areas of agricultural cooperation between the two countries and expressed readiness to jointly work together to strengthen cooperation.

Jennie Van Der Mheen from Wageningen University and Research highlighted the numerous researches undertaken on Ethiopia’s agriculture sector that can be utilized by Dutch companies who wish to learn Ethiopia’s potentials in this area.

Finally, three Dutch companies who have businesses in Ethiopia shared their experiences, lessons and areas that could be improved.

Overall, the companies reiterated the potentials in the sector and expressed their interest in continued engagement with Ethiopia.