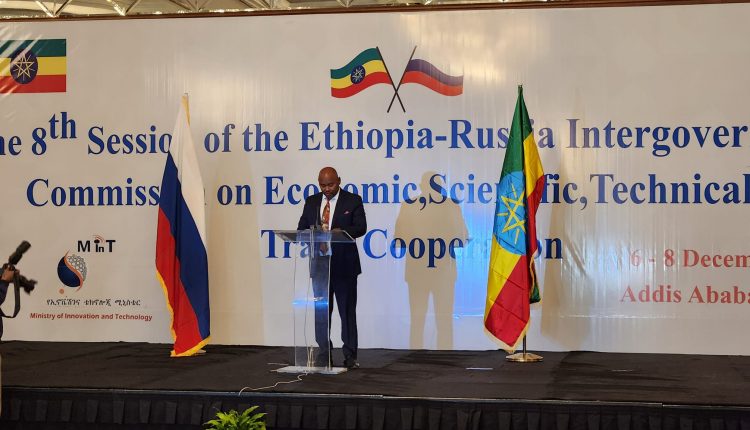 Minister of Innovation and Technology, Belete Molla, during his opening remark, mentioned the strong historical relationship between Ethiopia and Russia.

He thanked Russia for its support to Ethiopia in science, education and other areas, emphasizing that these ties should continue to be strengthened.

The Minister stated that the meeting will strengthen science, technology, economy and business cooperation as well as people-to-people relations.

Belete called on Russian companies to invest in the home-grown economy that Ethiopia is implementing in mining and other sectors.

“Since ancient times, people of our two great countries’ have enjoyed spiritual and cultural ties that served as foundation for excellent friendship that flourished over years,” he added.

Evgeniy Petrov, Head of Russian delegation & Head of the Federal Agency for Subsoil Use, on his part, expressed his heartfelt gratitude for the warm welcome accorded to him and the delegation.

He mentioned that the ties between the two countries have always been based on mutual interest, solidarity and friendship.

Meanwhile, Russian Ambassador to Ethiopia, Evgeny Terekhin, said that the joint session a platform for deliberations to implement the agreements made in practice and to increase trade and investment.

High-level Russian government officials and diplomatic delegates were present at the opening of the meeting.

It is said that the delegates will also hold discussions with top Ethiopian government officials, the business community and other stakeholders.

The meeting is scheduled to be held for three consecutive days, including today, according to Ethiopian News Agency.

The representatives of the two countries are expected to discuss issues that will further strengthen their cooperation in science, technology, economy and trade.

At the same time, they are also expected to review the results of the previous agreements by presenting the issues they plan to carry out jointly and separately.

Russian delegation arrived in Addis Ababa yesterday to participate in the meeting.

It is to be recalled that the 7th joint ministerial joint session was held in 2020 in St. Petersburg, Russia.