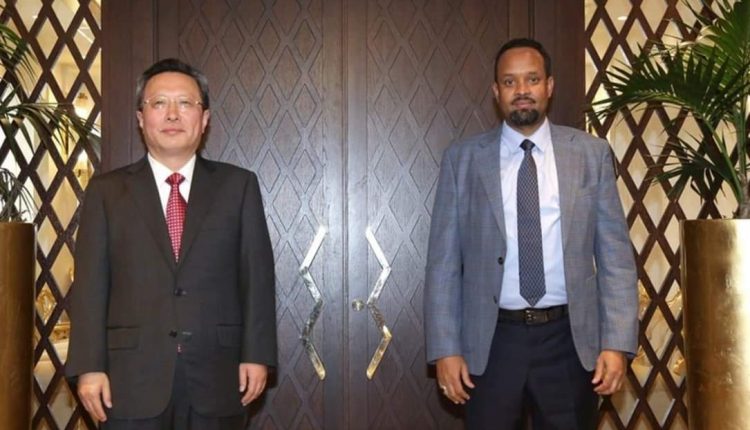 Addis Ababa, November 28, 2021 (FBC) – In the past two decades, the Forum on China-Africa Cooperation (FOCAC) mechanism has been proven to be an effective and robust platform in promoting China-Africa cooperation by supporting critical infrastructure development to engender greater connectivity, boosting trade activities, stimulating foreign direct investment and creating an enabling environment to unleash entrepreneurship and new local employment opportunities.

Finance Minister of Ethiopia Ahmed Shide discussed with Chinese Ambassador to Ethiopia, Zhao Zhiyuan on ways of enhancing partnership between Ethiopia and China and the upcoming 8th Forum on China-Africa Cooperation (FOCAC) Summit to be held in Dakar, Senegal, from 29-30 November 2021.

The two recalled that the successful completion of the Ethio-Djibouti Railway project is one of the early successes of FOCAC in creating a conducive environment for regional integration in Africa and complementing the African Continental Free Trade Area (AfCTA).

It was indicated in the discussion that China has been Ethiopia’s biggest trading partner, largest source of Foreign Direct Investment (FDI) and the biggest infrastructure contractor for many years. Under the FOCAC framework, and with the support and assistance from China, several road infrastructure projects are completed with a direct impact on improving commerce and livelihoods of Ethiopians.

The Finance Minister stated that the support extended from China to Ethiopia has been also instrumental in upgrading and construction of airports, water and power plants, factories and industrial parks. “These investments have a profound impact on job creation and poverty eradication.” he added.

The cooperation between the two countries in the realm of skill development has been instrumental with the realization of the construction of the African Leadership Excellence Academy, the Addis Ababa Riverside Green Development projects and the first and second satellites which were both launched with China’s assistance.

Ahmed underscored that Ethiopia-China’s all-round partnership would flourish via new forms of cooperation, such as digital economy, green development, aerospace and many more new and exciting endeavours.

Ethiopia and China have forged important and unwavering friendship and supported each other in this changing world, including in the face of the COVID-19 pandemic.