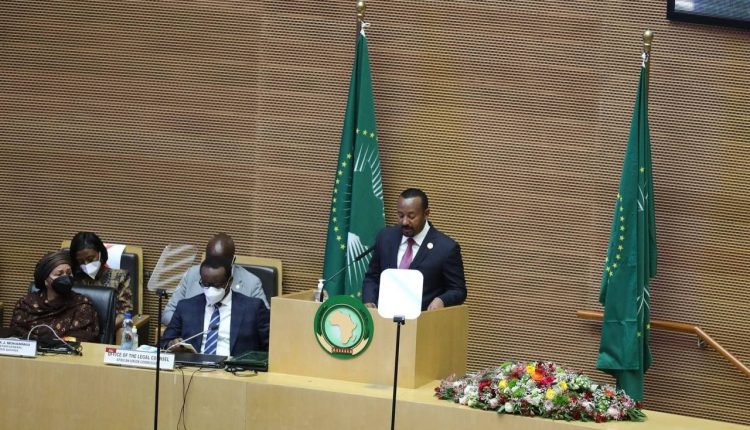 Addis Ababa, February 5, 2022 (FBC) – Prime Minister Abiy Ahmed, addressing the 35th Ordinary Session of the Assembly of Heads of State and Government of the AU, said tht Ethiopia has been dealing with the Covid 19 pandemic over the last two years. Among others, lockdowns, misinformation regarding the vaccine were among the challenges the country faced due to the prevalence of the Coronavirus, according to the Prime Minister.

He expressed gratitude for Africans for thier support to Ethiopia during its trying times. The greatest lesson that Ethiopia has learned over the past year is that without the solidarity of our African brothers and sisters, our existence as a nation would have been at great risk, the Prime Minister underlined.

The Premier said Ethiopia has been undertaking tremendous efforts to ensure agricultural productivity and food self-sufficiency. Irrigation is what has been given due attention in the agricultural sector, Abiy said.

He stressed the need to expedite efforts to ensure a prosperous Africa through sustainable development activities.

Prime Minister Abiy indicated that Ethiopia launched the Green Legacy Initiative in 2019 so as to mitigate climate change thereby enhancing productivity of the agricultural sector and ensuring food security. The Green Legacy Initiative plans to plant 20 billion trees in 4 years, the Premier noted, adding that over 18 billion seedlings have been so far planted in the past three years alone. Ethiopia has also distributed tree seedlings to neighbouring countries to expand the green legacy at the regional level.

Ethiopia has been undertaking several efforts to ensure peace, he said, adding that the recent release of high profile individuals from prison is part of the efforts underway.

An inclusive national dialogue is also on the pipeline in order to ensure the peace and democracy building in the country, the Prime Minister noted.

He also called for proper representation of the African continent at the UN Peace and Security Council calling the international community to support the continental efforts in doing so.

Abiy also called for concerted efforts to promote diverse cultures of Africa as part of the activities to enhance the tourism industry. He also called on Africans to incorporate wisdom of forefathers and mothers in the ongoing continental efforts to achieve the agenda 2063 of Africa.