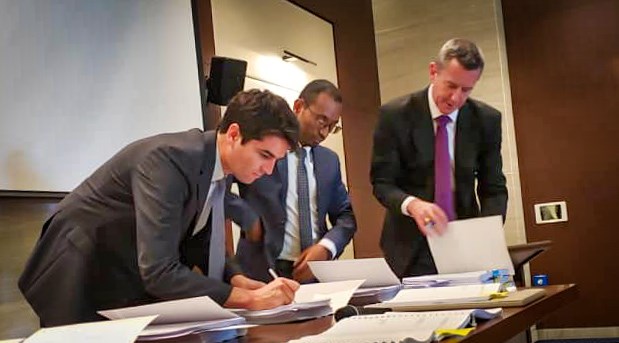 Addis Ababa, April 1, 2020 (FBC) -The Tulu Moye and Corbetti geothermal projects signed new power purchase and implementation agreements with Ethiopia, worth a total of $1.2 billion of investment from both companies to generate 300 megawatts of electricity in Ethiopia using geothermal energy.

The two private-sector power companies came together with representatives from Ethiopia Electric Power and the Government of Ethiopia yesterday, represented by the Minister of Finance and the Minister of Water, Irrigation and Electricity to execute these agreements, marking a major step in the commitment of the Ethiopian government towards privately developed and financed power generation projects.

According to a statement issued by USAID Ethiopia, the ministers will present project documents with the Council of Ministers for their final approval next month.

Power Africa, a U.S. Government initiative, has been assisting the Government of Ethiopia and Ethiopia Electric Power since the start of the negotiation in 2013, providing continued legal, technical, project finance and capacity-building support to bring negotiations to a successful outcome.

S Sudan won’t do anything that could harm Ethiopia: Amb Morgan

S.Sudan refutes information circulated as if it gave land to…

Nation launches construction of truck terminal at border to…