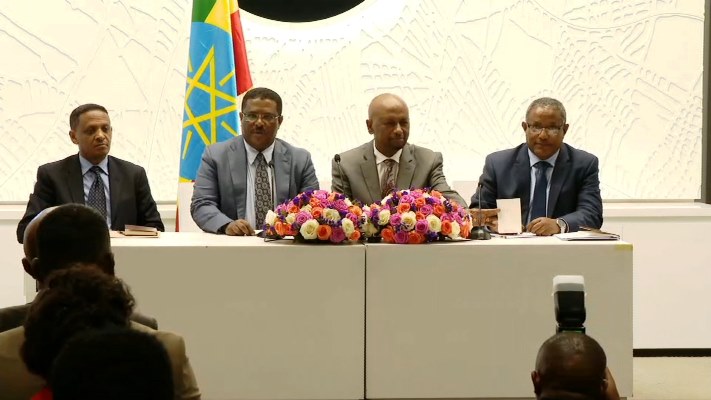 Ethiopia is building GERD because it has full rights to build it: FM

Addis Ababa, February 3, 2020 (FBC) –Ethiopia is building the Grand Ethiopian Renaissance Dam (GERD) because it has the full rights to build it, said Gedu Andargachew, Minister of Foreign Affairs.

The Foreign Minister made the remark here today at a press conference he issued together with Dr Engineer Seleshi Bekele, Minister of Water, Irrigation and Energy.

Ethiopia has the full rights to lift its citizens out of poverty using its natural resources. It is building the dam with all needed safety measures not cause a significant harm to the downstream countries, he said.

Though Ethiopia is building the dam by taking into account this issue, it entered into talks in order to build trust and confidence among downstream countries, he said.

After the series of talks held on a number of issues over the past years, Ethiopia, Sudan and Egypt managed to narrow their differences, the Foreign Minister said.

Following the talks held in Washington, the three countries had also reached agreements on many issues. However, there are also technical and legal issues that have not yet been agreed on, he said.

Ethiopia believes that these issues would be resolved through dialogue and some of them need more time for consultation because “we want the negotiation to preserve Ethiopia’s interest,” he said.

There is an interest from both the Egypt and the United States for the agreement to be concluded soon, he said, adding, Ethiopia, however, need more time to hold consultation with its people.

The Foreign Minister also questioned the role of the United States and the World Bank in the negotiation process. The Minister called on their role to be clearly stated and resolved.

The Minister further said the United States and the World Bank have interest to draft a agreement  beyond participating as observers, which is out of their role.

Negotiation is the only means to reach an agreement, he said, rejecting Egypt’s warning. Egypt’s warning “is not beneficial for everyone, except ruining relations.”

During the negotiation, Sudan demonstrated its firm support for the dam. It is one Egypt that has interest to take the hegemony on the Nile, he said.

Ethiopia wants the United States to play constructive role in pushing the countries to reach an agreement by themselves. Any role beyond this would not benefit everyone, he said.

In his update about the project, Dr Seleshi Bekele, Minister of Water, Irrigation and Energy said the construction of the dam is well in progress.

He said filling of the dam will start next July and is expected to hold 4.9 billion cubic meter of water by the end of the month.

He said the dam will start power generation in February and March next year.