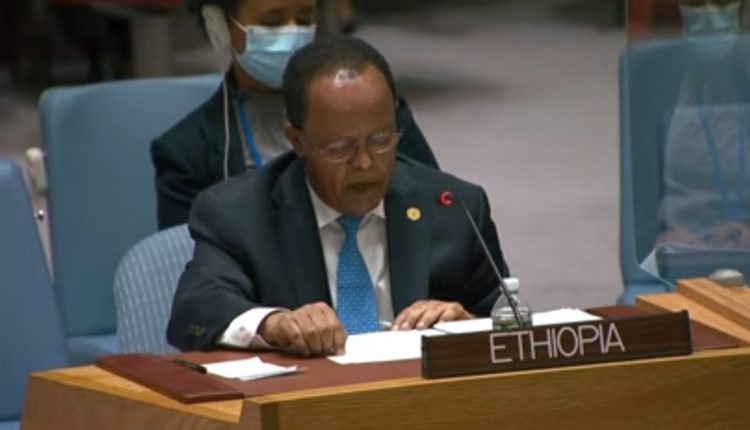 Ethiopia is not under any legal obligation to provide explanations about expelled UN officials: Envoy

Addis Ababa, October 7, 2021 (FBC) – Special Representative and Ambassador of Ethiopia to the UN, addressing a recent meeting of the UNSC on peace and security in Africa, said that the government of Ethiopia is not under any legal obligation to provide justifications or explanations for its decisions regarding the expulsion of the UN officials.

The UN staff Ethiopia expelled sidelined their oaths, the rules of professional conduct, and the principles of humanitarian assistance, he said.

Ambassador Taye Atskeselassie explained that guiding principles for humanitarian assistance 46/182 provides that the sovereignty, territorial integrity and national unity of states must be fully respected. Ethiopia will continue exercising its due rights in doing so, he said.

“Among the multitude of transgressions that we selected with great care, and caution, needless to say, the misconduct of few individuals doesn’t speak to the professional and able team of the UN, in Ethiopia or anywhere else,”

“Rather, it speaks of the serious ethical dilemma that existed in the humanitarian operation in Ethiopia for the past 11 years. These individuals executed the conspiracy created by tplf and its members to generate an image of extreme causality that once quote unquote, humanitarian intervention and rescues the criminal group to use their own words, they were looking to create a Darfur like situation.

They suddenly and overnight created 1 million victims of health disaster. While the OCHA country office reports 2.8 million people that need emergency health assistance, the main office was made to report 3.8 million, only because that level of inflation of misery was needed to elevate the crisis to level three. They categorise the situation integrating under IPC five, based on data collected from a region of 6 million population by a single FAO staff and interpreted by two UN staff that are Ethiopians and open TPLF supporters based in Rome,”

They assisted in fabrication of false allegations submitted to the UN Security Council or the white paper. The white paper contained unfounded allegations, including the use of hunger as a weapon and preferred the need to apply resolution 2417/18. The former head of OCHA was made to report to this council 152 Ethiopians died due to food shortage while such an incident had never occurred.

They assisted in stiffening food, medicine, communication equipment, all other essential supplies and equipment and transfer to TPLF right before their expulsion, they were facilitating the deported Ethiopian ethnically segregated group of Ethiopian migrants from Saudi Arabia and their resettlement in a third country in Africa for training and preparation before they join combat with TPLF.

In effect, an operation that completely sidelined the UN country office was created. Apart from the selfish interest of individuals, we have evidence that the entire endeavour is created by a higher and more sophisticated motivation that seeks to undermine the champion state and rescue the TPLF.