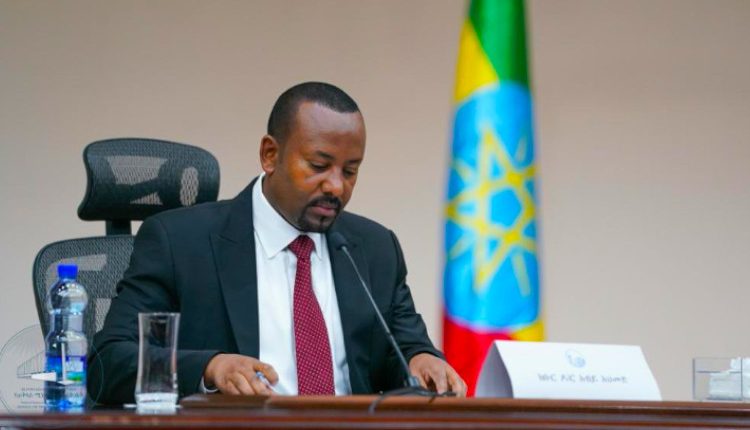 Addis Ababa, July 5, 2021 (FBC) – While reacting to queries raised by parliamentarians, the Prime Minister explained about the backdrop of the law enforcement measured took place in Tigray region.

Premier said the terrorist TPLF mobilized the people of Tigray for war despite the numerous livelihood challenges of the people and attacked the Northern Command of the National Defense Force and these threats pulled the Federal Government into a conflict it was forced to engage in.

The federal government have had no aspirations to engage in conflict yet TPLF posed a threat on four fronts.

TPLF mobilized irregular forces siphoning national institutions and resources and mobilizing paid elements across the country given the mission to destabilize and multiply instability.

Sacrifices being made in the Tigray region to restore services and repair basic infrastructure have cost us the lives of personnel in the line of duty as the criminal clique attacked these individuals.

The Premier underlined that gains have been made in addressing the TPLF threat as the federal government has taken back weaponry seized illegally from the Northern Command, decreased the effects of the attempts to divide the Ethiopian society and apprehended key leadership of the criminal clique.

“In my view, those interested in seeing the conclusion of the conflict in the Tigray region are very few. It seems there are interests that seek to see the weakening of the Ethiopian state through a protracted conflict” he added.

“As a sovereign nation, we have tolerated a lot. Without government recognition armed forces were being organized, conflict entrepreneurs and propagandists were deployed throughout the country. The people of Tigray were told that they were at risk of war. Elders, investors, politicians, locals and investors were sent to mediate. Ultimately, the Northern Command was attacked. We were forced to set out to defend the country and return looted national resources and weapons. “

The main task of law enforcement was short-lived. Much work has been done to prevent the success of those who wanted to attack Ethiopia. We have tried to focus only on the destructive forces of the conflict and to prevent attacks on cities.

After the main law enforcement operation, efforts were made to support agriculture, health, and education. More than ETB 100 billion has been spent on training the new administration and making them self-sufficient and to rehabilitate Tigray. It is not difficult to continue the war, it is rather difficult to progress to development.

The process of withdrawing our forces took more than a month. It was not heard when two rounds of troops were leaving, and it was only in the third round that the withdrawal of troops began to be known.

The evacuation from Mekele happened in the fourth round. Ethiopia had to shift focus towards projects to be completed, COVID prevention, returnee migrants, and agriculture. We need to use our capacity and resources to deal with inflation. In light of these circumstances, we have mobilized our forces as the situation is not as threatening as before, he said.

The fact that the successful 6th National Election has not been widely reported by international media while a single agenda is blown out of proportion, suggests that Ethiopians need to realize the international media landscape. All parties need to consider that Ethiopia’s growth is everyone’s growth and Ethiopia’s damage is everyone’s loss, the Prime Minister stressed.