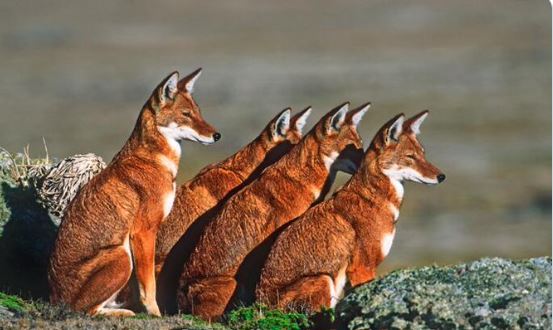 Addis Ababa, June 28, 2022 (FBC) – Native Ethiopian wolves are threatened by loss of habitat mainly due to an ever-depleting number of prey, an Ethiopian wildlife expert has warned.

Girma Ayalew, wildlife health and research expert at the Ethiopian Wildlife Conservation Authority, told Xinhua recently that not more than 500 Ethiopian wolves remain in their shrinking and increasingly fragmented habitat on top of the Ethiopian highlands.

The Ethiopian wolf, also known as Red Jackal, is endemic to Ethiopia. Its population is restricted to just six isolated enclaves in the Ethiopian highlands, more than 3,000 meters above sea level, the expert said.

“The Ethiopian wolf feeds on mountain rodents. Human interference involving expansion of settlement and agricultural land against their habitat has resulted in loss of their prey — the rodents, leaving for the wolves little to eat,” said Ayalew.

The endemic Ethiopian wolf lives in packs, each consisting of 12-14 wolves and a female wolf has a gestation period of five months and delivers 4-6 pups, said Ayalew, noting that the pups often have low survival rate.

Naturally, there is only one breeding pair in a pack and other female and male wolves in the same pack are not eligible for mating, the expert elaborated.

The alpha female, usually the mother of the pack, is entitled to be the only mother in the pack throughout her life as long as she is physically fit and not harmed.

The expert said having only alpha females and the less probability for pups to grow also negatively affected the wolf population in the eastern African nation as adult wolves must leave the pack in case they resort to mating.

“Dog disease such as rabies is another potential threat for the survival of the most endangered Ethiopian wolf,” said Ayalew, recalling that the disease had killed at least half of the wolf population in Bale National Park six years ago.

Ayalew said households living closer to the wolves’ habitat often have a number of dogs, which frequently go to the wild and sometimes mate with the wolves. He called for the need to scale up sterilization and vaccination campaigns against domestic dogs.

The expert said wolves are territorial wild animals and they neither go away from their territory nor allow other wild animals to enter into their area.

According to Ayalew, grown up female and male wolves have a role to safeguard their territory but settlers in the parks perceive them as a threat to themselves and their livestock and often kill them.

Ethiopian WildLife Conservation Authority, along with international partners, is working to ensure that the settlers’ dogs don’t breed with the wolves to avoid the unique genetic make-up of the endemic animal, Ayalew said.

He noted that the authority conducts periodic vaccination campaigns to prevent infections such as rabies from domestic dogs to the native wolves.