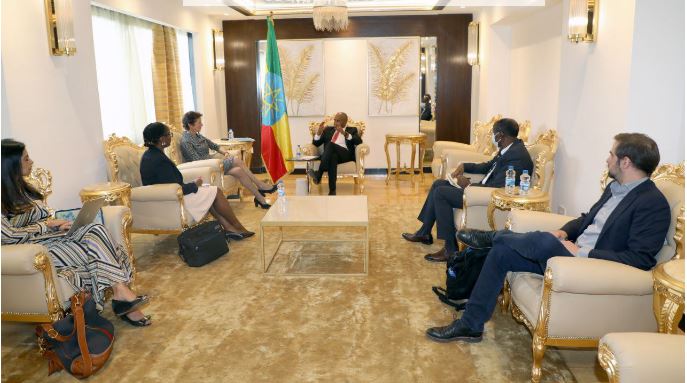 He told the Assistant Secretary General that Prime Minister of Ethiopia, Abiy Ahmed, has launched the Yelemat Turufat Initiative where the government promotes production of diversified foods from animal source, vegetables and fruits.

Gerda stated that Ethiopia joined the SUN Movement in 2012 and that opportunity it will create to mobilize the private sectors, United Nations, donors, businesses as well as the academia.

She also indicated that the private sectors have faced few challenges and one of them is the tax imposed on import of premix food. She also asked the government to consider enhanced financing for Small and Medium Enterprises.

Garda also indicated that many countries are affected by climate induced drought and flooding, COVID-19 and conflict hence hyperinflation of the food price is making it difficult for the countries to pay their debt.

In this regard, she suggested Ethiopia to be a strong voice for other countries and utilize the debt relief for programs such as improving the food and nutrition status of their citizens.

He also commended the fruitful leadership demonstrated by the Ministry of Health to this end. He also affirmed commitment of the government to mobilize resources for nutrition as per recommendations forwarded by the Assistant Secretary General.

Ethiopia is advocating for debt relief and holding discussions with lenders through direct negotiations. The State Minister also stated that the Government along with several financial institutions has been working to maintain financing for SMEs.

He also pledged commitment to follow up measures to address issues related to premix tax relief to help revamp the import of the products.