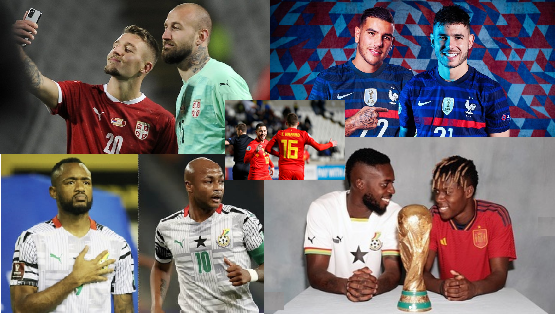 Addis Ababa, November 29, 2022 (FBC) – The 22nd edition of the FIFA World Cup Qatar 2022 is on its 10th day as World’s elite footballers continue gracing the tournament with their respective countries.

The tournament has brought unexpected results and contrasting emotions to football fans. Underdog teams have shocked contenders of the tournament with surprise results.

Argentina’s defeat to Saudi Arabia, Japan’s victory over Germany, Morocco’s win against Belgium, Iran’s win over Wales, Qatar’s early exit from the tournament, and Ghana’s pulsating match against Korea Republic were some of the exciting highlights of the current global football tournament in terms of results.

The Ayew brothers have represented Ghana’s national team at the World Cup. These siblings are the sons of former Ghanaian midfielder, Abedi “Pele” Ayew.

The 32-year-old winger Andre Ayew plays for Al Sadd Football Club in the Qatar League, while Jordan Ayew, who is one year younger, plays as a striker for English Premier League club, Crystal Palace.

Andre Ayew has recently scored when Ghana lost 3-2 to Portugal in Group H. He is participating in the World Cup for the third time.

Lucas Hernandez and Theo Hernandez are also the other prominent siblings who represented the reigning world champions, France, at the FIFA World Cup 2022.

26-year-old Lucas Hernandez plays for Germany’s Bayern Munich, while Theo Hernandez, who is one year younger, plays for Italian club AC Milan. However, Lucas Hernandez is ruled out of the current tournament after his injury in France’s 4-1 win over Australia on their first group stage match.

A year ago, the Williams family would not have expected either of their sons to be at the FIFA World Cup.

Although a star player for Athletic Bilbao, and having recently broken a Spanish league record by playing 203 consecutive matches, Inaki had not featured in a Spain squad since 2016.

Younger brother Nico, meanwhile, had just begun his professional career and boasted only a handful of appearances for the same club.

One of the underdogs for the FIFA World Cup in 2022 is Serbia. And one of their major players is offensive midfielder Sergej Milinkovic-Savic. The 27-year-old has had a fantastic 2022–23 season for the Italian club, Lazio.

He has made 20 appearances for Lazio in all competitions, with five goals and seven assists this season.

His brother Vanja Milinkovic-Savic plays goalkeeping for the other Italian club, Torino. Hence, Vanja and Sergej are both on the Serbian team competing at the FIFA World Cup in 2022. Together, they represented Serbia in their 2-0 loss against Brazil last Thursday and the 3-3 draw with Cameroon on November 28, 2022.

Lionel Messi partners with OrCam to improve lives of…